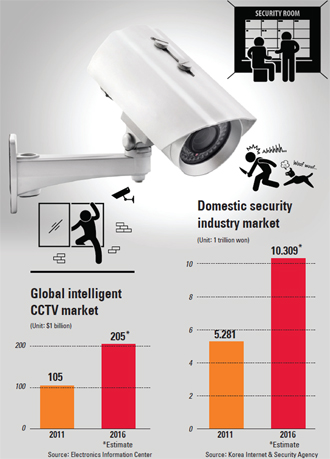 In the Big Brother state of Korea, CCTV is almost everywhere, around every corner, outside and inside. While CCTV often aids criminal investigations, it is also becoming a necessity for individuals and small businesses - and Korean mobile companies are looking to cash in on the trend.

A 58-year-old surnamed Kim, who rents out rooms in a town house in suburban Gyeonggi but lives in Seoul, said using CCTV has helped him better manage his business.

He can watch the area around the house and check inside the building from his home using his smartphone, which also automatically saves the videos. Kim said the monitoring makes him feel safer and also allows him to better communicate with his tenants.

“I constantly check on who comes in and out of the building with the smartphone, even though I live in Seoul and the town house is in Gyeonggi,” said Kim.

“A while ago I got a call that one of my tenants had passed away and the ambulance and the police came in, and I could check the CCTV to see what had happened and rewind it over and over.”

New developments mean that CCTV can show a sharper image of an intruder, and some cameras have heat sensors and facial recognition technology.

Mobile carriers have recently started installing CCTV at small offices and homes instead of just local governments and public facilities as in the past. Seeing video surveillance equipment as a new growth driver, the telecoms are expanding their investments.

According to the Electronics Information Center, Korea’s market for intelligent CCTV was estimated to be worth 1.02 trillion won ($993 million) as of early 2013, with 2.65 million CCTV cameras used by individuals and 350,000 CCTVs operated by the government and public entities.

LG U+, the nation’s third-largest mobile carrier, said that wireless CCTV was more reliable because cable-connected CCTV would stop working if the communication line with the control center was disconnected. Wireless CCTV is also cheaper to install.

LG U+ has installed CCTV cameras that run on an LTE network and transmit high-definition images from Korea Water Resource Corporation’s facilities and 4,000 train and subway stations nationwide.

SK Telecom has started a three-year option to operate two CCTVs for about 70,000 won a month, which is being widely used by small businesses and in rural areas.

It also features heat sensors to detect the human body, enabling the camera to follow the movements of an intruder. When a person is detected, the CCTV system sends a text message to the customer so they can immediately check the footage.

According to SK Telecom, it is one-third of the price of other CCTV security services.

As the variety of CCTV services has increased, low-end high-definition CCTV with 1.3-megapixels is being used by more customers for personal use.

“We will continue to upgrade the Point Cam LTE service by securing a wider variety of CCTV products that can be applied to any place and occasion, as well as enabling automatic SMS alert service to customers when the heat sensors are turned off,” said an SK Telecom spokesman.

Other Korean IT firms such as Samsung SDS and LG CNS are also promoting their versions of intelligent CCTV, which combines big data with CCTV.

Intelligent CCTV notifies the user of an emergency by automatically recognizing the image being recorded using big data.

“We installed a system that automatically distinguishes images portraying possible crime scenes from the vast amount of image data collected by CCTVs,” said a spokesman for LG CNS. “As the market is expanding rapidly, we plan to grow the business as a part of our big data business.”

Following the trend, global IT companies have also joined the security and surveillance market. Google last month acquired Dropcam, a home CCTV company that allows surveillance via smartphone, for $555 million.

It also acquired Nest, which has equipment to remotely control the temperature of a house, for $3.2 billion in January. Canon purchased CCTV company Milestone last month.