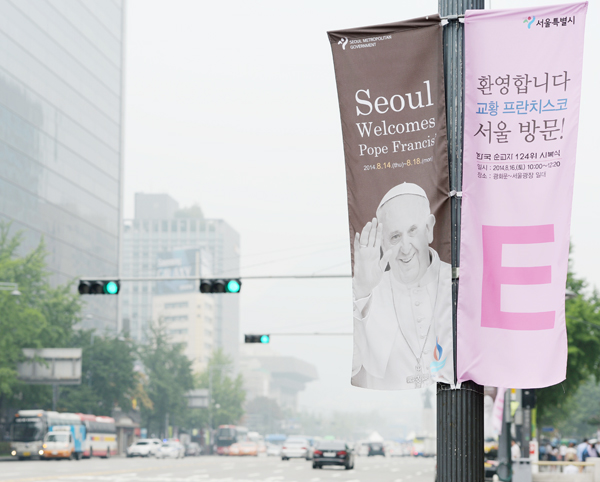 President Park Geun-hye will greet Pope Francis this morning upon his touchdown at Seoul Airport in Seongnam, Gyeonggi, on the southern outskirts of Seoul, in a gesture of the highest respect, according to the Blue House yesterday.

In the afternoon, the Blue House will throw a welcome ceremony at its grand garden for the religious leader, who enjoys “rock star” popularity for his progressive statements about the underprivileged and marginalized.

The ceremony will be attended by some 20 members of Francis’s entourage and Korean officials. The event will be followed by a summit between the pope and President Park.

The two will then deliver speeches in the presence of the pope’s entourage, diplomats and figures from religious, cultural, political, media and civic realms.

On the last two papal visits, when Pope John Paul II visited Korea in 1984 and 1989, then-Presidents Chun Doo Hwan and Roh Tae-woo received the Vatican leader at the airport accompanied by the National Assembly speaker and the chief justice of the Supreme Court, which was the practice at the time. Park will not be following that tradition.

Popes have made it a rule to travel overseas on chartered planes, not their own jets. Pope Francis will depart from Rome’s Fiumicino Airport on an Airbus A330 from Italy’s Alitalia Airlines for the 11-hour flight to Seoul, according to sources at the Vatican. The plane is usually used on scheduled passenger operations, and the pilots and cabin crew are also from the Italian national airline.

Since the aircraft has no first-class section, the pontiff will take the first row of the 20-seat business class. A sticker is placed on the exterior of the aircraft to indicate that it is temporarily the volo papale, or papal airplane.

On his way back, the 79-year-old pontiff will fly on a Boeing 777 from Korean Air Lines, which is equipped with first-class seats.

He will be traveling with a 30-man retinue, 70 reporters and some of the Roman Curia’s administrative staff.

The Vatican did not provide a reason for the decision to bring along the administrative workers.

The most senior officials from the Vatican Secretariat to join Francis in business class include Pietro Parolin, the secretary of state of the Vatican, and Archbishop Giovanni Angelo Becciu, the substitute for general affairs. Reporters are likely to occupy the coach-class area.