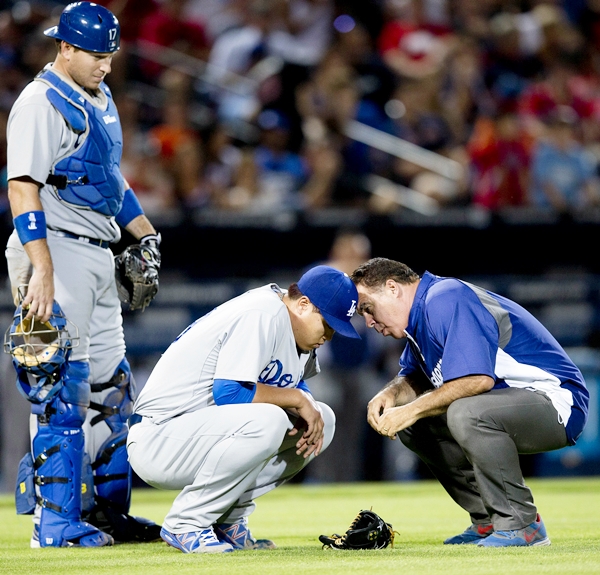 A member of the Los Angeles Dodgers training staff talks to Ryu Hyun-jin as catcher A.J. Ellis listens in the sixth inning of a game Wednesday against the Atlanta Braves. Ryu left the game under his own power. [AP/NEWSIS]

Los Angeles Dodgers starting pitcher Ryu Hyun-jin picked up a painful sixth loss of the season, giving up three runs in five and two-thirds innings against the Atlanta Braves before exiting the game due to a strained right gluteus muscle.

The Braves avoided a three-game series sweep with a 3-2 victory at Turner Field in Atlanta.

After Ryu delivered ball four to B.J. Upton in the sixth inning, he winced in pain and immediately waved his left hand to the dugout to call out manager Don Mattingly and the team’s trainer. After chatting with them and moving his right leg up and down for about a minute, Ryu left the game.

The team said on Twitter that he is day-to-day. His next scheduled start is against the San Diego Padres.

“It was the first time I felt a pain in that area,” Ryu told Korean media. “I felt some pain earlier in the game, and I just kept pitching because it wasn’t that serious. But after the last pitch to Upton, I felt something was wrong. I don’t think it is anything major.”

Mattingly said the 26-year-old lefty starter might undergo an MRI exam to decide whether to place him on the disabled list.

Ryu allowed two runs with two outs: in the fourth and fifth inning.

In the fourth, Justin Upton walked with one out. After striking out Evan Gattis, Ryu allowed a single to center field to send Upton to third. Andrelton Simmons then lined a single to right to score Upton with the second Atlanta run.

One inning later, Ryu yielded a one-out single to Jason Heyward, then struck out Phil Gosselin before hitting Freddie Freeman with a pitch to put Heyward in scoring position. Justin Upton then hit a ground-ball single to right to score Heyward.

The Dodgers were six for 17 with runners in scoring position in the first two games of the series, but went one for eight in the finale.

On Wednesday, they did all their scoring in the second inning. Matt Kemp led off with a sharp double to right field, then came home on Carl Crawford’s line-drive single to center. Miguel Rojas then delivered a ground-ball single up the middle to score Crawford.

With the bases loaded with Dodgers and one out in the top of the ninth, Kemp grounded into a 4-6-3 double play to end the game.