Diplomatic policy may be the Achilles’ heel of the Park Geun-hye administration and needs immediate improvement, according to a group of experts of foreign affairs from four countries.

And the relationship between Seoul and Tokyo poses the greatest threat for Korean diplomacy, as revealed through a JoongAng Ilbo questionnaire of 30 foreign affairs experts including nine American, Chinese and Japanese analysts of Korean issues and international relations.

This comes despite general support for the Park government’s diplomatic policies in public opinion polls.

“Neither Korea nor Japan holds a viewpoint of the larger picture of what kind of relationship they want to build,” said Shunji Hiraiwa, a professor of Korean studies at the Kwansei Gakuin University in Japan.

Over two-thirds of the experts questioned by the JoongAng Ilbo pointed to frosty Japan-Korea relations as the diplomatic issue that Seoul should deal with most urgently.

While diplomacy can be described as dialogue between countries, South Korean diplomacy faces a crisis because of a lack of communication with one of its closest neighbors. Korea and Japan have not held a leaders’ summit for the past two years since relations took a turn for the worse in August 2012, after President Lee Myung-bak’s landmark visit to the Dokdo islets in the East Sea, which Japan claims and calls Takeshima.

This excludes President Park Geun-hye’s trilateral summit with U.S President Barack Obama and Japanese Prime Minister Shinzo Abe in The Hague in March on the sidelines of a nuclear summit. They mainly discussed North Korean denuclearization and security issues.

At the March 25 trilateral summit, Park was pictured with a stony expression, in contrast to a relaxed and smiling Abe, which some U.S. analysts interpreted as a sign of Korea being too rigid.

Likewise, North and South Korean relations have continued to be rocky, and the six-party talks on Pyongyang’s nuclear program have long been stalled. North Korea walked out of the talks, which also include China, Japan, Russia, the U.S. and South Korea, in December 2008.

Korea’s relationship with the U.S. and China are robust at the moment.

Any change in the status quo of China and Japan’s relations - whether they improve or worsen - could have a negative impact on Korea, according to the experts. 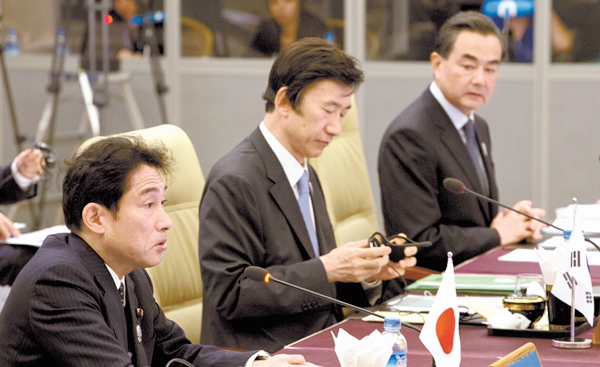 Nearly half, or 14 of the 30 scholars, said that worsened Sino-Japanese ties would have a negative impact on Korea. The survey indicated that there was a likelihood of relations getting worse, at an average of 5.5 out of 10 points, 10 indicating that relations will definitely worsen.

But 12 out of the 30 experts also said that improved Sino-Japanese ties would have a negative impact on Seoul, and the likelihood of this happening averaged 5.2 points out of 10.

Improving ties between North Korea and Japan was another point of concern in diplomatic affairs.

Experts picked South Korea-Japan relations as the biggest diplomacy threat for Seoul, reasoning that the volatile relationship could have a negative influence on relations with other countries in the region.

“If Korea and Japanese relations are good, it will have a big impact on how Chinese and Japanese relations turn out,” said Han Suk-hee, a China studies professor at the Graduate School of International Studies at Yonsei University. “But if Korea-Japan relations remain as bad as they are now and Chinese President Xi Jinping and Japanese Prime Minister Shinzo Abe hold a summit, it will become a big burden on Korean diplomacy.”

Examples of diplomatic blunders, according to the experts, include President Park’s March 1 Independence Movement memorial address. In the address, Park said, “The historical perspective of aggressor and victim cannot be changed, even though a 1,000 years pass by.”

Kim Han-kwon, a China expert with the Asan Institute for Policy Studies said, “From China’s perspective, a Korea whose relationship with Japan is blocked because of historical issues can be looked down on [as a country] that is easy to deal with and played around with.”

U.S. and Japanese experts pointed out that bad relations between Seoul and Tokyo would not benefit Korea’s politics, economy or security.

Frank Jannuzi, president and CEO of the Maureen and Mike Mansfield Foundation and a former policy director of East Asian and Pacific Affairs for the U.S. Senate Foreign Relations Committee, said it would be beneficial for South Korean-Japanese and Chinese-Japanese relations to develop into a “win-win situation” and added that Washington, while competing with Beijing, “always makes official and unofficial dialogue channels in order to improve relations.”

The diplomatic freeze towards Japan seems to be reflected in a stronger anti-Japanese sentiment among the general public, according to a recent survey.

The JoongAng Ilbo and the Asan Institute of Policy Studies conducted a survey of 1,000 adults nationwide asking which countries the Park Geun-hye administration needs to improve diplomatic cooperation with.

In contrast, in a February survey conducted by the Asan Institute, 68.3 percent of respondents said that South Korean-Japanese ties needed to be improved, while 27.3 percent said they didn’t.

Likewise, 61.9 percent of respondents said that improving North Korean and Japanese ties would have a negative impact on the South, while just 8.1 percent said it would have a positive impact.

By comparison, 13 of 30 foreign affairs experts surveyed by the JoongAng Ilbo said that improved ties between Pyongyang and Tokyo would have a positive impact on the South, while around a third, or 11, said it would have a negative impact.

Analysts point out that the government may have had a role in inciting such anti-Japanese sentiments.

“The problem with the government’s policy on diplomacy towards Japan right now is that it jumped on the bandwagon of the public’s preexisting anti-Japanese sentiments,” Kim Tae-hyo, a political science professor at Sungkyunkwan University and a former senior secretary of national security strategy to President Lee Myung-Bak, said. “And when there is a problem related to Japan, policy leaders carry out a kind of diplomacy that feeds such sentiments.”

Kim added, “The leaders of both countries need to stop unnecessarily putting blame on the other side and manage the situation in order to prevent any more misunderstanding.”

In regards to Japan’s move to exercise its right to collective self-defense, which has been met with concern from Korea, Kim Yong-soo, a professor of politics and international relations at Sogang University, said, “Instead of regarding it just negatively, in the case of successful cooperation between Korea, the U.S. and Japan, it will have an effect of increasing restraint of North Korea … There is a need to carefully consider the actual benefits of information exchanges between the three governments.”

He added, “In regards to diplomacy towards Japan, there is a need for a greater practical choice to be made to grasp something larger, even if it means making some concessions in regard to the political stance or the leadership’s philosophy.”