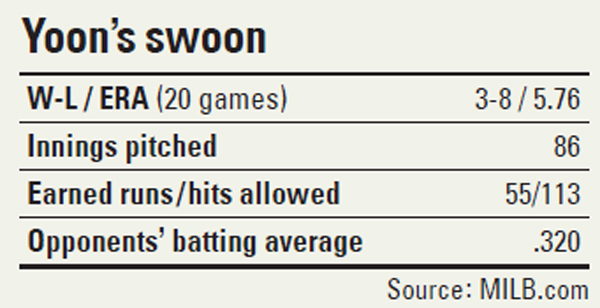 Such expectations didn’t last long, however, as he was sent down to the Norfolk Tides, the Orioles’ Triple-A affiliate, in spring training.

In Korea at the time, there were two schools of thought on Yoon: that he simply was not an MLB-caliber pitcher and that the right-hander, who was the KBO’s MVP in 2011, was having a hard time coming back from a series of injuries and just needed some time to adapt to the new league.

Yoon wants to be a starting pitcher in the big leagues, but as September approaches, that looks like a pipe dream in light of his performance with the Tides.

The harsh reality is that Yoon’s future in the big leagues is likely to be decided over the next two months.

He began the season in the Tides rotation and stayed there until June 21, when he was sidelined with an injury. Since returning in mid-July, he has been in the bullpen.

Considering his fastball-slider repertoire and his history of injuries in Korea, one of the ways for Yoon to get back on his feet would be to regain his fastball, which could exceed 93 miles per hour and which earned him the MVP award during the 2011 season with a record of 17-5 and a 2.45 ERA. The other is to stay healthy.

Yoon’s fastballs this year, mostly in the 88 to 90 miles per hour range, have been like batting practice for Triple-A hitters who are just one step away from the Major Leagues. And without his good fastball, Yoon’s hard-breaking, mid-80s sliders have not been effective.

In 16 starts, he averaged 4.75 innings per outing, never holding opponent to under a .300 batting average. As of Monday, the league was hitting .320 against him.

“He doesn’t have any problems with his control, but his stuff isn’t working against hitters,” said analyst Song Jae-woo. “Since hitters have been attacking his fastballs easily and his sliders and third pitch [changeup] are not effective, he’s having a hard time getting outs.”

It looks like Yoon has lost his competitiveness as a starting pitcher and the Orioles are already aware of that.

The Tides are trying Yoon as a long reliever. On Aug. 10, he threw 44 pitches against the Gwinnett Braves in 2 1-3 innings, then 45 pitches, also against the Braves, eight days later over three innings.

The Triple-A season ends Sept. 2 and Yoon is expected to join the Orioles when the roster is expanded to 40. He currently is included on Baltimore’s 40-man active roster.

Yoon has virtually no chance of joining the Orioles rotation, but he should have another chance to prove himself as a swingman when the team is losing big.

His contract pays him $4.2 million over the next two seasons and guarantees him an MLB roster spot in 2015. Unless he can impress Manager Buck Showalter in the coming weeks, it might not be with Baltimore.

“It isn’t the time he can say ‘I need more time to adapt’ anymore,” Song said. “It’s time to prove something.”