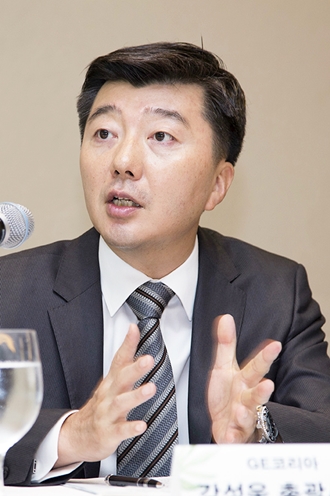 GE Korea, the local unit of the United States-based General Electric, expressed a keen desire to participate in Korea’s next-generation fighter jet program once it gets off the ground.

If Korea chooses GE jet engines, according to Khang Sung-wook, president and chief executive of GE Korea, it will help Korea nurture its aerospace industry since GE remains open to delivering its technological expertise.

“GE has played a significant role in the development of Korea’s aerospace defense industry by providing jet engines, avionics and integrated systems in Korea,” Khang said yesterday at a press briefing at the Westin Chosun hotel in Sogong-dong, central Seoul.

“Through the KF-X program, GE seeks to elevate its level of contribution to the growth and development of Korea’s aerospace defense industry by increasing localization, expanding collaboration on the development of engine technologies and supporting overseas exports of Korean fighter jets.”

The KF-X program involves developing 120 next-generation fighter jets to replace aging F4 and F5 jets by 2025. The Korean Air Force would be provided with new jets and the government also hopes to export jets to other countries.

The timeline for approval of the program and the official bidding process hasn’t been disclosed, so GE didn’t disclose the specific economic benefits Korea could enjoy through its participation, such as how many jobs would be created and what technology it would transfer. But the company sketched out an overall picture.

According to GE Korea’s release, it plans to support industry growth in Korea by expanding partnership in the development of engine technologies and expanding local sourcing to a level “that exceeds the Air Force’s KF-X’s requirements.” This would include partly purchasing Korean-made engine parts and components.

Also, based on its presence in more than 160 countries, GE plans to utilize the network it has to help Korea export aircraft once the jet is developed. Previously, GE had supported the Korea aerospace industry in T-50 and FA-50 export programs in Indonesia, Iraq and the Philippines.

In total, GE has supplied more than 1,300 engines to 600 combat aircraft including combat planes and helicopters in Korea, and more than 400 engines to 280 private airplanes.

“The aviation industry is a key strategic industry of the creative economy that is mixed and combined with the latest science technology, and have high effects to induce production that will create high-quality jobs,” Khang said. He added that when GE Chairman Jeffrey Immelt met with President Park Geun-hye in Seoul last year, the two exchanged ideas on nurturing the aviation industry as a sector with high growth potential in the future for both Korea and GE.

“With the full support of the government during the 1970s to the 1980s, major corporations actively participated in leading Korea to become a first-rate country in the shipbuilding and marine industries,” he said, “and with the development and export of the next generation domestic fighter jet KF-X, GE will play a big role in strengthening national defense including the development of the aviation industry.”