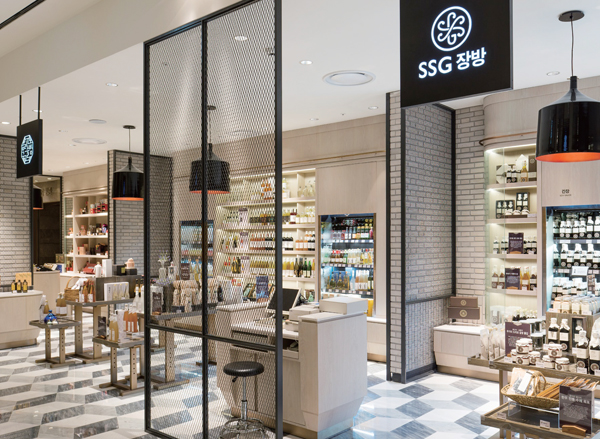 The basement floor of Shinsegae Department Store’s main branch in Hoehyeon-dong, central Seoul, was crowded with hungry customers at noon yesterday, waiting in line to grab a bite at one of the newly opened restaurants inside the “food market.” Across the floor, people were shopping for fresh vegetables and fruits inside the premium supermarket.

“The concept is very new,” said Kim Bo-young, an office worker who was at the food market for a lunch of sushi, at its official opening yesterday. “It is very different from food zones at other department stores in Seoul. I have a feeling that I’ll stop by very often for meals and dessert.”

As part of efforts to give shoppers a unique gourmet experience, Shinsegae Department Store opened the food market with traditional Korean food, international desserts, groceries and popular chain restaurants. The food market’s gourmet street and premium dessert zone have been open since June and the supermarket opened yesterday after a three-month renovation.

According to the retailer, the supermarket sells high-quality meat, fish and produce. There is also a juice corner in the store where customers can have their choice of vegetables and fruit made into fresh juice without any additives or sugar. The retailer said that due to the growing number of single-person households, it set up a deli corner where a former chef at the Westin Chosun hotel cooks fresh meals.

In front of the premium supermarket is a wine zone with 1,200 different varieties in the cellar, paired with different cheeses.

“Our food market is a place where consumers are able to experience both traditional and global food,” said Lee Jin-soo, head of the main branch.

To celebrate the opening, Shinsegae Department Store said it is giving away aprons to shoppers who purchased 100,000 won ($98) or more on their Shinsegae card at the food market from yesterday to Sunday and from next Friday to Sunday. People who purchase 200,000 won or more get a Shinsegae bag made of jute.