Digital detox picks up in Korea

Digital detox picks up in Korea 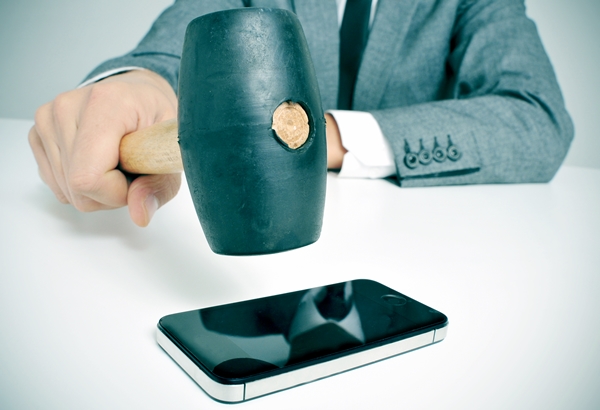 Thirty students were brought together in an auditorium at SK Broadband Human Resources Development Center in Anseong, Gyeonggi, on Aug. 12. They were participating in a three-day youth camp to prevent and cure digital addiction and help participants find healthy ways to use their digital devices. The campers, who were sulky the previous day when their smartphones were taken away, had become happy campers by the final day.

A ninth grader said the first thing he did every morning was check his smartphone. He habitually fiddles with his smartphone during classes, and it is common for him to stay awake past midnight playing smartphone games.

But after the three-day camp, he resolved that he will use his phone only when necessary.

“I was anxious without my phone at first, but became comfortable after a while,” the middle schooler said. “I realized it’s much more fun to talk and play with my friends.”

With rising concerns over addiction to digital devices like smartphones and tablet PCs, there’s an increasing need for so-called “digital detox” - weaning people off excessive use of their digital devices.

“Korea has an overwhelmingly high rate of digital device usage, but there aren’t enough efforts toward digital detox when compared to other countries,” said Yoon Yong-chul, an SK Telecom executive director.

But it’s clearly catching up. 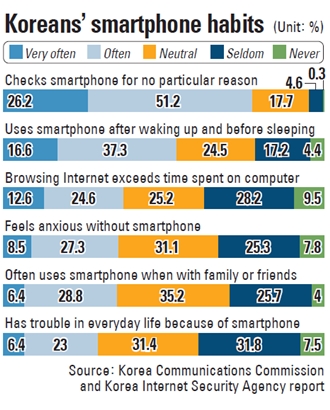 Resorts are joining the digital detox bandwagon. Walk through the Healience Zen Village in Hongcheon County, Gangwon, and you will find your cell phone useless. The rooms have no televisions or air conditioners, let alone Internet access. It’s an unwired experience.

“People’s brains are continuously exposed to digital stimulation in modern society and they require more rest,” said Dr. Lee Si-hyung, a psychiatrist who established the resort. “People come here for emotional relaxation with the intention to willingly endure the inconvenience.”

At Jijihyang, located in Paju Book City in Gyeonggi, each guesthouse is equipped with 30 to 50 books instead of a television. The concept is to force people to take the time for thinking and meditation.

The National Natural Recreation Forest Office is coming up with ways to utilize recreational forests as a space to cure digital addiction, and there is an increasing number of ecological experience villages. Similar efforts are spreading across different business sectors. One restaurant collaborated with a publishing company in a campaign to turn smartphones off for 30 minutes every day.

There are also government- or company-led digital detox campaigns. The Ministry of Gender Equality and Family opened a National Youth Internet Dream Village on Aug. 9. SK Telecom and SK Broadband collaborated with Leftovers Love Sharing Community and the National Information Society Agency to operate the three-day youth camp. The Seoul Metropolitan Government has started a 1-1-1 Campaign that encourages people to have family time once a week for an hour with no smartphones.

Meanwhile, some people are taking voluntary vacations from emails, text messages and social network services (SNS). Korea’s first computer science Ph.D holder, Moon Song-chun of the Korea Advanced Institute of Science and Technology (Kaist) College of Business, is a leading ICT expert. But Moon stays away from most digital devices. He does not use SNS such as KakaoTalk or Band, and important messages must come to his office via fax instead of email.

“I had been using a flip phone but it got too old so I got a smartphone recently,” Moon said. “I try to control myself out of the concern about fragmentation of thought and digital dependence caused by overusing digital devices.”

The term “digital detox” was added to the Oxford English Dictionary in August 2013. In the United States, there are digital detox camps for students and adults, and some hotels and resorts offer discounts for guests who willingly give up their digital devices. There is also a National Day of Unplugging in March.

Korea has gone from being the most wired nation on Earth to one of the pioneers of wireless existences, so it has to watch out for digital addiction. According to a report released last year by the Korea Communications Commission and Korea Internet Security Agency, 77.4 percent of Korean smartphone users responded that they “check smartphones for no particular reason.” Almost 30 percent said they have had trouble in their daily lives because of smartphones. Average Internet use time on smartphones is an hour and 42 minutes per day. According to the Ministry of Gender Equality and Family, teenagers’ smartphone addiction rate (25.5 percent) was twice as high as their Internet addiction rate (11.7 percent) and triple adults’ smartphone addiction rate (8.9 percent).

High-tech device usage gives less reason for people to remember things, causing “digital dementia” for some. There can be a decrease in people’s ability to concentrate, make decisions or be creative.

“In intense cases, [digital addiction] can result in severe hindrance of studies or daily lives,” said Seo Bo-kyung, a senior researcher at National Information Society Agency. “Digital detox is especially crucial for children and teenagers whose brain functions have not been fully developed.”

Experts say it is important to have good habits with digital devices. Several tips for digital detox first timers include: Designating times and purposes of device usage; checking all social media at the same time (instead of checking different mediums at different times); and resisting using smart devices when resting. Parents have an important role in detoxing children and teenagers who have low self-control.