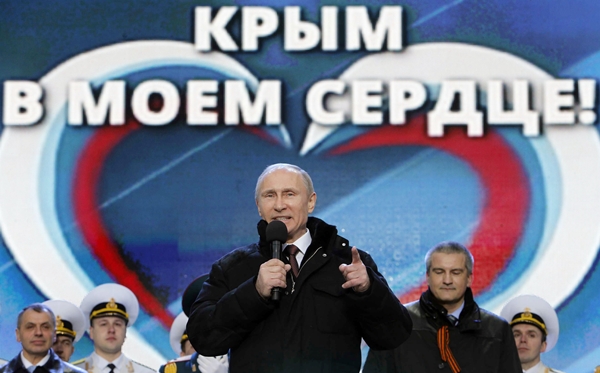 Russian President Vladimir Putin addresses the audience during a rally and a concert called “We are together” at the Red Square in Moscow in March to support the annexation of Crimea. [REUTERS]

In the unfolding battle of reciprocal sanctions, the Russian government, economy and people seem to be preparing for the worst. Imposed financial restrictions aggravated the problem of capital flight, sowed worries about the seizure of corporate accounts in European banks and limited access to capital markets. But the availability of finance was crucial to sustaining corporate activity, both domestically and internationally, and running numerous infrastructure projects.

In its response, the Russian government seeks various ways to avoid a capital deficit by mobilizing internal financial resources. Proposed measures include a ban on offshore accounts and higher taxes for big businesses and affluent citizens. Capital flight and income disparity have become pervasive problems since the dissolution of the USSR. They need to be resolved to achieve sustainable economic growth. However, the effectiveness of the proposed measures is questionable since they are not directed at the core issues: the transparent functioning of institutions and the optimization of government spending. Moreover, the new measures can potentially worsen the business environment and neutralize progress in the relaxation of bureaucratic barriers.

Taxes targeting “the rich” could become even more controversial if mismanaged. The criteria and mechanism of the tax increase remain unclear. A very thin layer of the Russian middle class could be hurt, resulting in lower consumption and, thus, contraction of consumer demand with subsequent problems for businesses in the retail sector. In fact, various data already hint that Russians are spending less and have become more frugal in their daily shopping. Big retail groups that benefited the most from the pre-crisis consumption boom are reporting falling sales.

Russian companies are also taking measures of their own by trying to save funds in European banks. Some of them are relocating money from European bank accounts to banks in Asia, especially Singapore and Hong Kong. If completed, this could be one of the largest relocations of funds, adding momentum to Russia’s turn to Asia. This turn has all the possibilities of changing the fundamentals of the Russian economy.

Unlike the situation 20 to 30 years ago, Asia is no longer a region with scarce capital vis-a-vis Europe. In the aftermath of the Asian financial crisis, governments accumulated enough national sovereign funds to use as leverage during hard times. In addition, pension funds also increased their resources in preparation for the aging population. All these funds are major global investors trying to put their capital to work. The lending rate is far from being high. Leaving aside the problem of dependency and the need to diversify borrowing portfolios, it’s clear that Russian businesses can potentially satisfy their financial needs in Asia. Other externalities for Russia as a whole include the possible relocation of business accounts. They may come in the form of development stimuli for the neglected Russian far eastern territories and a better geopolitical balance that over the last 20 years was heavily skewed towards Europe.

There is one more point to be made here. Relocated funds - if such a relocation is to occur - will be returned very slowly in future. Business does not make such radical decisions every day; they are typically part of a broader long-term strategy. This means that the coming five to 10 years - possibly longer - will be marked by lower vigor in business ties between Russia and Europe, specifically hurting those parts of business communities that were exposed to business with Russia. Yet again, the possibility of this scenario raises the question of the goal of sanctions. Are they designed to hurt both parties and for a certain period of time curtail the possibilities of closer ties? If not, what is it then?

For Russia, a turn to Asia might be good and in some part even desirable, but it will not come without a cost. The potential economic effects are debatable and could be discussed for a long time. But without a doubt, it will again invoke Russia’s so-called “eternal identity problem”: located in Eurasia, is Russia a European or an Asian country? The previous quest for an answer was not successful and proved rather painful.

* The author is a professor at the Hankuk University of Foreign Studies.