Deposit interest at a record low

Deposit interest at a record low 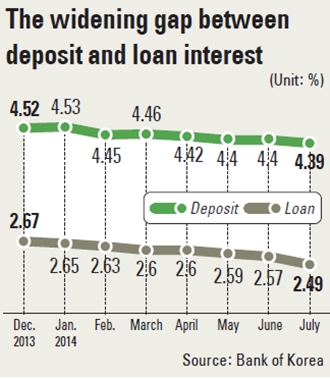 Deposit interest fell to a record low last month and it is likely that the trend will continue largely due to the central bank’s decision earlier this month to cut the key interest rate in line with the government’s effort to boost the economy.

There are also growing expectations that the central bank will make another cut later this year.

According to the Bank of Korea, the average interest rate on fresh savings deposits was 2.49 percent last month. That’s 0.08 percentage point down from the previous month. Starting in March, savings deposits have been consistently reaching new lows, according to data compiled since 1996.

The interest on fresh loans has also hit a new low. But compared to deposit interest, it has declined at a slower pace. Compared to June, the interest rate on new loans was lowered by 0.01 percentage point in July to 4.39 percent.

This largely resulted from the falling interest rates on loans provided to individuals.

The average interest rate on corporate loans rose. Interest for loans provided to companies rose from 4.53 percent in June to 4.54 percent.

For individuals, the interest rate fell from 3.94 percent from the previous month to 3.93 percent in July.

In July, banks hurried to lower their interest rates on deposits, as a consensus was already building in the market that the central bank would lower the key interest rate, which it did this month under pressure by the government to participate in its economic kick-start.

Data from the Bank of Korea also shows that banks were reluctant to lower their loan interest rates.