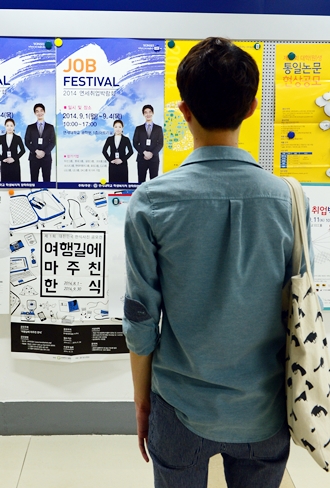 A college student looks at a bulletin board with a “Job Festival” poster at Yonsei University in western Seoul yesterday. According to the Ministry of Employment and Labor, job prospects for young people haven’t improved much since 2012. In the first half of this year the employment rate for people in their early 20s was 43.9 percent, a drop from 44.6 percent in 2012, but an improvement compared to last year. The rate also retreated from 69.8 percent to 69.1 percent for those in their late 20s. [NEWSIS]