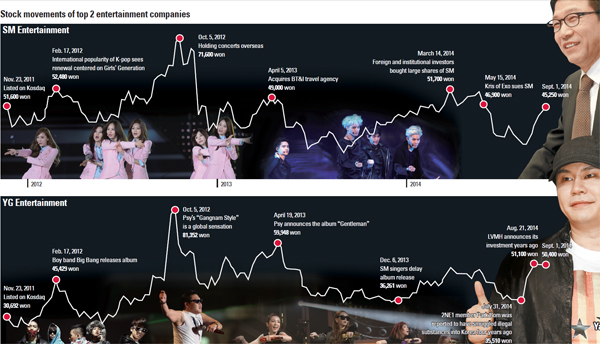 The most successful entertainment houses in Korea are YG Entertainment and SM Entertainment. But today, the balance has been tilting toward YG, especially after the luxury brand Louis Vuitton announced last month that it would invest in the company.

Until recent years, SM Entertainment was the biggest powerhouse in the local entertainment market after the 2011 K-pop revival. The nine-member girl band Girls’ Generation was the entertainment company’s most popular product.

The girls’ third album, “The Boys,” sold nearly 228,000 copies in less than two weeks after its release in 2011, making Girls’ Generation the first local girl group to sell more than 200,000 albums. The music video for the album’s title track got more than 10 million hits on YouTube in four days and swept music charts in France, Finland and Sweden. The girls’ clothes and cosmetics became a sensation.

But everything changed when Psy’s music video for “Gangnam Style” went viral after its release on July 15, 2012, on YG’s label. It was a phenomenon that not even the quirky singer-songwriter expected.

“Gangnam Style” broke the record for the most views in YouTube history. The video was watched more than one billion times in the first five months after its release. The song even climbed up to second place on Billboard’s singles chart and stayed there for seven weeks.

Thanks to Psy’s overnight global fame, YG became well known and the company’s stock value started to climb. Before Psy’s sensation, YG’s stock value was trading at about 40,000 won ($39.45) a share but since early October, it shot up to 80,000 won.

The face value of the company’s stock held by Yang Hyun-suk, producer and CEO of the entertainment company, has increased by 70 billion won since last month. His 28.8 percent of the company is now estimated to be worth 220 billion won.

News that LVMH Group, which owns Louis Vuitton and other luxury brands, invested in YG pushed the entertainment company’s stock up even more.

In just a month, the value of the company’s stock rose more than 39 percent.

During the same period, the value of Lee Soo-man, founder and CEO of SM Entertainment, shrank to 180 billion won. He owns 21.27 percent of the company’s stock.

In May, the company’s stock fell by more than 20 percent after one of the members of its popular boy band Exo filed a lawsuit against SM to nullify his contract. Its stock value hasn’t recovered much since.

But SM still leads rival YG in revenue. According to the Financial Supervisory Service, SM’s revenue last year was 268.7 billion won and YG’s was 150 billion won.

Both YG’s Yang and SM’s Lee were popular Korean singers who later became producers. Their career paths seem similar, but the way they manage their companies, produce albums and train their singers is different.

Lee is more of the silent type. Since retiring as an entertainer and starting SM Entertainment, he has made few public appearances. On the other hand, Yang still appears on TV and comes across as a more friendly individual.

The style of the singers at each company is also distinctly different.

Most of the boy and girl bands on SM’s label, including Girls’ Generation, Super Junior, f(x) and Exo, are strictly managed and trained based on the company’s earlier experience with groups such as H.O.T. and TVXQ. SM entertainers must be good looking and dance in strict coordination.

YG entertainers, including artists like Psy, Big Bang, 2NE1 and Epic High, have more freedom on stage. Each group or singer has characteristics that are different from the others. Yang’s attitude can be seen in one of the conditions of the contracts that the artists sign: Girl groups are not allowed to get plastic surgery. He focuses more on musical talent rather than on looks.

While YG, led by Psy, has stormed the United States and Europe, Lee of SM has focused on China. He believes the country is the best market for Hallyu and even created Exo-M, a subgroup of Exo consisting of the boy band’s Chinese members, for the fans there.

SM plans to increase its foothold in China through localization by using more of its Chinese entertainers.

Exo is the country’s most popular boy band, selling more than one million albums last year.

“There is a strong connection between the entertainment company’s singers and its stock value,” said Choi Seok-won, an analyst at Shinhan Investment & Securities. “This is because album releases and concerts go directly into the company’s revenue.”

Like SM, YG also suffered its share of financial issues earlier this year. Its stock value plunged after it was reported that Park Bom, a member of 2NE1, reportedly smuggled illegal drugs into the country four years ago.

Choi at Shinhan is taking an interest in YG’s new boy group Winner.

“Once Winner’s Team A and Team B officially start their schedules in the second half, by the end of this year, the group will raise the company’s revenue to 18.4 billion won,” Choi predicted, which would likely further raise the price of YG shares.

Recently, the heads of both entertainment companies have been busy expanding their business and diversifying their portfolios.

SM is solidifying its focus on China. Lee recently went to Beijing to sign an agreement with China’s largest web portal company, Baidu. The Chinese company will distribute SM music and videos and jointly run an online K-pop community.

SM has also been increasing its influence in other types of entertainment including movies, TV shows and even musicals. It took over talent agency AMENT, which represents high-profile Korean actors and actresses including Jang Dong-gun and Kim Ha-neul. SM also took over the drama production company Hoon Media.

“By casting SM’s own entertainers in its own shows, the company is creating synergy [from M&As],” said Hong Jeong-pyo, a researcher at Kiwoom Securities.

For its part, YG is expanding into fashion. Later this month, the company will launch its casual fashion brand Nona9on, a joint venture with Samsung’s Cheil Industries.

And on Aug. 20, LVMH announced that it would invest 61 billion won in YG .

“YG is becoming a major stock,” said Kim Chang-gwon, an analyst at KDB Daewoo Securities. “If LVMH becomes the second-largest stockholder with 11.2 percent a year, the value of YG will increase.”