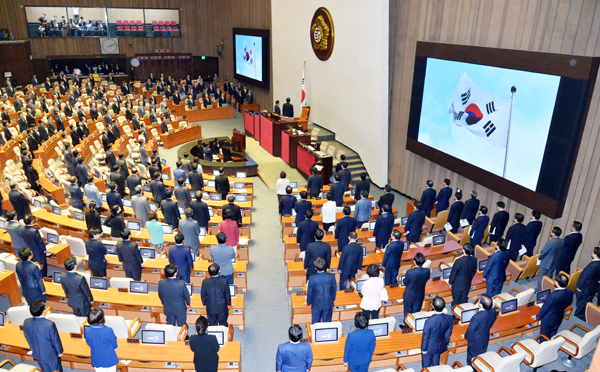 Lawmakers of both the ruling and opposition parties attend the opening ceremony of the 329th regular session yesterday at the main conference hall of the National Assembly. However, the opposition New Politics Alliance for Democracy did not decide whether it will resume its normal parliamentary operations. [NEWSIS]

The National Assembly kicked off its 100-day regular session yesterday with a myriad of bills stuck in limbo following nearly four months of political wrangling between the ruling and opposition parties over the terms of the special Sewol law.

Despite numerous bills pending, the ruling and opposition parties have yet to arrange further parliamentary schedules except for another plenary session set for tomorrow.

The New Politics Alliance for Democracy (NPAD) is still undecided over whether it should return to the National Assembly to assume parliamentary proceedings during the remainder of the 100-day session amid the legal stalemate.

With lingering uncertainty over how the two will go ahead with the regular session, 217 lawmakers from the ruling Saenuri Party and the NPAD attended the opening ceremony of the regular session and submitted a motion to strip Saenuri Rep. Song Kwang-ho of immunity from arrest.

The 72-year-old ruling party lawmaker is accused of taking 55 million won ($54,314) in bribes from private railroad companies in exchange for favors in 2012 while he worked under the parliamentary committee for land, transport and maritime affairs.

It is expected that the two will pass the motion without much objection during the plenary session tomorrow. The two sides also agreed to vote on whether to approve the appointment of the Supreme Court Justice nominee, Kwon Soon-il.

The ruling and opposition parties did, however, approve the appointment of Park Heong-joon as the Assembly’s secretary general yesterday. Lawmakers voted 183 to 28, while six abstained.

At the start of the session, 15 newly elected lawmakers addressed the floor, their first parliamentary activities under the 19th National Assembly.

Ahn Cheol-soo, the former NPAD co-chairman, was among the lawmakers at the opening ceremony, the first time he has been present in parliament since he stepped down from his post a day after the opposition’s stunning defeats in the July 30 by-elections. The loss ultimately undermined the former software mogul’s potential 2017 presidential bid.

“I am very sorry that I did not resolve the Sewol special law issue when I was co-chairman,” Ahn said to reporters yesterday on his way to the main conference hall. He added that he had not shown up for a public event over the past month because he had been busy reflecting on his political career.

Yet despite agreement on those issues, no further parliamentary schedules had been determined as of press time yesterday, and the NPAD had yet to decide whether it will return to parliament.

The two sides have remained locked in a stalemate for months over the specifics of a special Sewol law, a fight that became so pressurized that the opposition conducted an all-night sit-in protest inside the National Assembly last week.

The NPAD waged a parliamentary boycott last week during an extraordinary session in protest over the Saenuri’s refusal to form a trilateral consultative body involving the two parties and an association of parents who lost their teenage children in the April 16 Sewol ferry disaster.

The walkout delayed the parliamentary audit of government bodies as well as the legislation of bills unrelated to the ferry crisis, some of which the government hopes will give a much-needed boost to a stagnant economy.

Wrangling over the Sewol law has continued even though the two sides reached compromises twice over the past month, both of which the NPAD reneged on following fierce protests from the victims’ families.

Prime Minister Chung Hong-won made an unexpected visit yesterday to the Assembly office of interim NPAD Chairwoman Park Young-sun before the plenary session, in what was thought to be an attempt to persuade her to urge the opposition to normalize parliamentary function and end the political standoff.

At the time, however, Rep. Park was in a meeting in another room.

Tomorrow, Rep. Park is scheduled to visit Paengmok Harbor in Jindo, South Jeolla, where dozens of grieving relatives continue to camp out, waiting for the remains of the 10 still missing in the disaster to be returned.

In an effort to reach a middle ground, the Saenuri Party held a meeting for the third time with an association for the bereaved families yesterday at the National Assembly, but they failed once again to iron out their differences on the special law.

While the victims’ parents have been persistent in their demand that a fact-finding committee be given the authority to investigate and indict suspects in uncovering the truth behind the sinking and the government’s botched rescue efforts, the Saenuri has also been unrelenting in its stance that giving such power to the committee would be unconstitutional.

The families want the investigative committee empowered with such unprecedented rights because they believe it is the only way to ensure an independent investigation free of political pressure, especially since the probe could target Blue House officials.

The Saenuri, on the other hand, claims doing so will shake the fundamentals of the country’s judicial system, in which only the prosecution holds the authority to indict suspects.

Under a bipartisan agreement reached on Aug. 19 - which the NPAD later rejected in the face of the families’ objection - the Saenuri would be allowed to choose two members of a seven-member recommendation panel tasked with selecting two candidates for a special prosecutor to investigate the tragedy, but only after its selections are approved by the victims’ relatives and the main opposition party.

Under the deal, President Park Geun-hye would also make the final choice on who would serve as the special prosecutor.

The families opposed the bipartisan deal because they object to the ruling party having any say in selecting the candidates for the recommendation panel.

During the meeting with the Saenuri yesterday, the families once again made their demand clear that they want the fact-finding committee to lead the investigation.