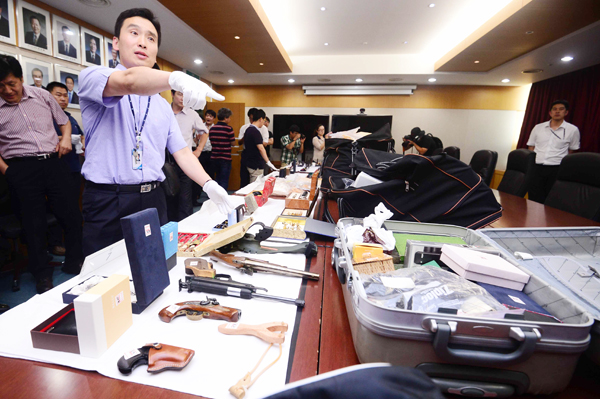 Three bags and their contents believed to have belonged to Yoo Byung-eun, the late patriarch of the family behind the doomed Sewol ferry, are shown at the Incheon District Prosecutors’ Office yesterday.[NEWSIS]

Authorities investigating Yoo Byung-eun yesterday discovered three more bags filled with cash and luxury items, which were thought to have been used by the doomed Sewol ferry’s late owner while he was on the run.

The discovery came after the prosecution and police found seven other bags at a residence of a relative of Kim Myung-sook, a 59-year-old woman believed to have aided Yoo in his escape, and at the villa in Suncheon, South Jeolla, where the late businessman hid before it was raided in May. The bags were numbered from two to eight.

“While asking people related to the church to look for the missing bags, we were tipped off that three bags were seen at the residence of a believer of the sect, surnamed Park,” said a prosecutor at the Incheon District Prosecutors’ Office. “We found the bags by searching the place.”

None of the bags confiscated yesterday were tagged with numbers, but a label with “No. 1” was found in one of them. The luggage had more than 30 Montblanc fountain pens costing 0.5 to 1 million won ($494 to $1,012) each, a luxury watch, a diamond ring and several harmonicas.

The other two found at Park’s house had wild ginseng, commemorative coins, a stomach pump produced by an affiliate of Yoo’s business, and some of his personal belongings. The bags were not numbered.

Kim Young-seon, 58, a believer of the sect, better known as Guwonpa, or Salvation Sect, is suspected to have packed the bags. The prosecution believe Shin Myeong-hee, 64, another sect member who is thought to have orchestrated Yoo’s escape, instructed Park to look after the bags.

The prosecution expect that more bags will not be discovered given that Yoo’s sister’s husband - the 31-year-old son of former ambassador to the Czech republic Oh Gabriel - said he tagged the bags and that they did not exceed 10.

“We suspect Yoo was trying to pack his personal belongings in a hurry and tagged the bags with random numbers just to identify them and that the numbers did not have certain meanings,” said a prosecutor.

“We also believe that cash found in his bags were not withdrawals from a bank but donations from his followers from over a long time.”

Meanwhile, Guwonpa announced a new representative during a two-day funeral for Yoo Byung-eun over the weekend.

Koo is known as a key aide of Yoo who led his funeral procession over the weekend.