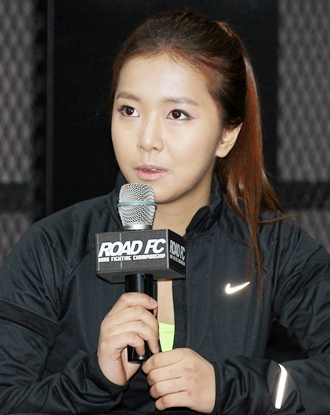 MMA fighter Song Ga-yeon, 19, will host the fourth season of a martial arts survival audition program aired on XTM TV, which is tentatively called “Crying Fist,” local media reported. The first episode of the upcoming season will air on Sept. 16.

Song, frequently dubbed the “beautiful fighter” among her male fans here in Korea, made her much-anticipated MMA debut in Road FC 17 against Japanese fighter Yamamoto Emi on Aug. 17.

“Thank you for showing me the trust that I can pull it off,” Song was reported to have said by Ilgan Sports, an affiliate of the Korea JoongAng Daily, when asked how she felt about her new role as an emcee.

Song added that she hopes more people will show interest in martial arts through the show.