Heavy traffic ahead for Chuseok holidays

Heavy traffic ahead for Chuseok holidays 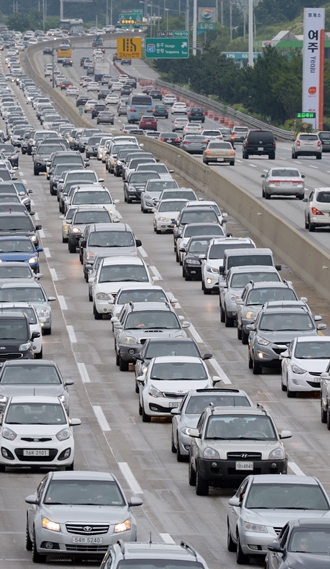 Cars are bumper to bumper on Yeongdong Expressway near the Yeoju rest area last month during the summer vacation season. [NEWS1]

The Chuseok holiday, when Koreans return to their hometowns to celebrate the harvest season with their families, is just around the corner. But so is a traffic jam.

The Ministry of Land, Infrastructure and Transport has designated today through Thursday as a special period for traffic management.

The ministry expects an average of 5.64 million people to travel daily and a total of 39.45 million during the period.

On Chuseok Day, which is Monday, the ministry expects 7.41 million people will be on the move.

According to the Transport Ministry, tomorrow will be the day with the most outbound cars on highways in the Seoul metropolitan area, while Monday will be the most crowded day for inbound traffic. Driving from Seoul to Daejeon will take about four hours and 20 minutes, while the Seoul to Busan trip will take seven hours and 40 minutes.

The ministry foresees a daily average of 4.05 million vehicles on the nation’s highways during the Chuseok holiday period. More than 34 percent of these cars will be on the Gyeongbu Expressway, followed by the West Coast Expressway with 14.2 percent.

According to data from the General Insurance Association of Korea and the Korea Insurance Development Institute, which analyzed traffic accidents during Chuseok holidays for the past three years, the day before Chuseok had the largest number of accidents, an average of 3,737, or 29.4 percent more than usual. An average of 13 traffic fatalities also were reported that day, a 42.3 percent jump.

On Chuseok Day, when Koreans visit the graves of their ancestors, an average of 7,813 people were injured in car accidents, or 75 percent more than usual and the most of the holiday period. Most fatal accidents occurred between 6 p.m. and 8 p.m.

As a way to reduce the risk of accidents, insurance industry insiders suggest taking advantage of free inspection services offered by automakers and auto parts companies.

Five local automakers, in association with Korea Automobile Manufacturers Association, have announced they will perform free car inspection services at highway rest areas from 9 a.m. to 5 p.m. today through Tuesday.

The checks will include the engine, brakes, tires, coolant and engine oil. Automakers also will inspect windshield wiper blades and other parts, and replace them at no cost. Towing and emergency dispatch services also are reinforced during the holiday period.

GM Korea and Renault Samsung Motors each will operate four inspection centers on southbound and northbound highways, while Ssangyong Motor will give checkups at five rest areas. Details can be checked on each automaker’s website.

The Korea Transportation Authority will offer free checkups at its 58 inspection centers nationwide through tomorrow. Today, the authority also offers services at the Cheonan rest area on Gyeongbu Expressway southbound. Hours are 9 a.m. to 6 p.m. today and 9 a.m. to 1 p.m. tomorrow.