BERLIN - Samsung Electronics and LG Electronics held press conferences with the Korean media a day before the opening in Berlin of IFA, the largest consumer electronics and home appliance show in Europe, which is in its 90th year.

Hong Won-pyo, president of Samsung’s Media Solutions Center, spent a lot of time elaborating on Samsung’s smart home service, because the company believes smart homes are the next big thing in the IT industry after smartphones and tablet PCs.

“We did a survey of European consumers and asked what they wanted in a smart home,” Hong said. 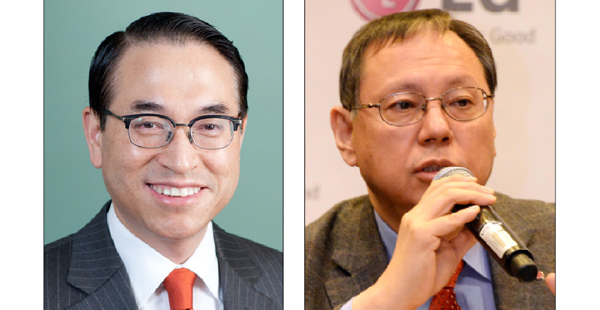 “And we found out that they want their homes to be safe and convenient. These will be our themes for our smart home service. And we believe the smart home 1.0 era has just begun.”

He continued: “If the smart home 1.0 era is where all electronic products interact with each other and with their owner, the 2.0 era will be the time when all electronic gadgets operate on their own. We will launch the 2.0 service in the first half of next year.”

Samsung said it will open its smart home platform to other companies.

“Consumers have Samsung products, but they may also have other products,” said Hong.

“In order to make gadgets from different brands synchronize with each other, we decided to open our platforms and work for standardization of the platform.”

When asked about security issues for smart homes, Hong said, “There will be a three-step security system. When the product is purchased, consumers should register their products on our website, and this is the first stage of the security.

“After that, whenever each important function of the smart home is activated, they have to punch in passwords. For the last step, when data is transmitted between devices, you have to go through a password authentication protocol.”

In a separate press event, the chief executive officer of the home appliance unit of LG Electronics told Korean reporters what LG has brought to IFA.

LG’s strategy for this year’s IFA and smart home market is to “go practical,” he said.

One example is a home chat service, which is already available in the United States.

Using a smartphone messenger such as KakaoTalk or Line, you can ask your refrigerator “What food has expired inside the fridge?” - as if you are talking to a friend. The refrigerator is programmed to reply.

The home chat service will be launched in the European market next year.

LG has also beefed up collaborations with other foreign companies. For example, Google’s Nest, which is a temperature-control device, will be featured in LG’s smart home appliances targeting the North American market.

Cho said he expects to see “double-digit growth in the European market while other competitors reported between 3 and 5 percent increases in sales for this year.”

“And our goal remains the same. We still aim to become the world’s No. 1 home appliance company in 2015. I believe we can get closer to our goal next year in terms of sales mainly due to consumer loyalty.”