Will speaker cut through logjam?

Will speaker cut through logjam? 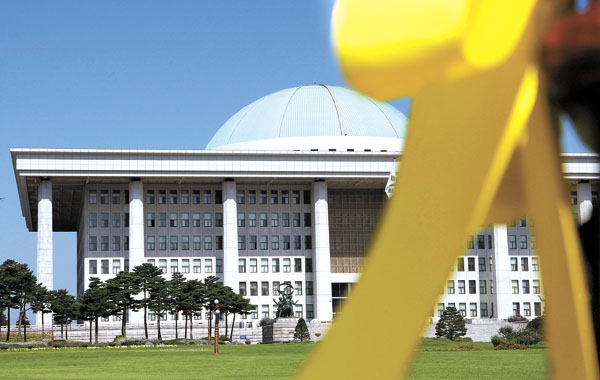 A yellow ribbon, a symbol of sympathy for the Sewol victims, is tied at the main gate of the National Assembly. The Assembly has been paralyzed by a stalemate over the special Sewol law since May. By Kim Hyung-soo

The political gridlock over the law to probe the sinking of the Sewol ferry continued amid reports that the National Assembly speaker may use his power to call a vote on other marooned bills.

Over 90 bills passed by committees have been stuck in limbo as the opposition New Politics Alliance for Democracy has refused to hold an assembly vote on them until it reaches a compromise with the ruling Saenuri Party on the terms of the special Sewol law, intended to get to the bottom of the cause of the sinking and the government’s bungled rescue efforts.

The parties actually reached compromises twice in August, but the NPAD walked away from both after complaints from families of the teenagers killed in the sinking.

No bills have been passed by the Assembly since May 2.

The new wrangling between the two erupted yesterday after news reports that Speaker Chung Ui-hwa may hold a plenary session next Monday and put 93 pending bills on a parliamentary vote by invoking his authority.

“The National Assembly law stipulates that the speaker could arrange a parliamentary schedule [such as a voting session] if parties cannot agree on it,” said Rep. Kim Hyun-sook, spokeswoman of the Saenuri yesterday at a press briefing. The lawmaker maintained the speaker has the authority to put bills already passed through the legislation and judiciary committee up for a parliamentary vote.

But the opposition NPAD wasted no time countering the Saenuri’s claim, saying the speaker lost the authority to unilaterally put bills to a vote after the passing of the National Assembly Advancement Act in 2012.

“Nowhere does the National Assembly Advancement Act stipulate that the speaker has the authority to assemble a parliamentary session,” Rep. Park Beom-kye wrote on his Facebook page yesterday. The former judge cited clauses of the National Assembly Advancement Act, which bans the speaker from forwarding bills for legislation unless the country faces natural disaster, wartime emergencies or there is an agreement between parties. “Though all the 93 bills were passed through the legislation committee, none of them falls under any of categories [for invoking the speaker’s authority].”

The National Assembly Advancement Act limited the majority party’s ability to railroad bills through the parliament, which was considered a misuse of their majority and a refusal to compromise with the opposition. Such railroading of bills by the majority party was regularly countered with fistfights and violent melees on the floor of the assembly and outside the building ? sometimes called Korean filibusters ? which came to embarrass the nation.

The National Assembly Advancement Act engineers the need for compromise into the parliamentary process. A bill can only be put up for a parliamentary vote when three-fifths of lawmakers, or 180, consent to it. The speaker is only entitled to unilaterally send bills for a vote in the case of national emergency such as natural disaster, wartime conditions or an agreement reached by party leaders.