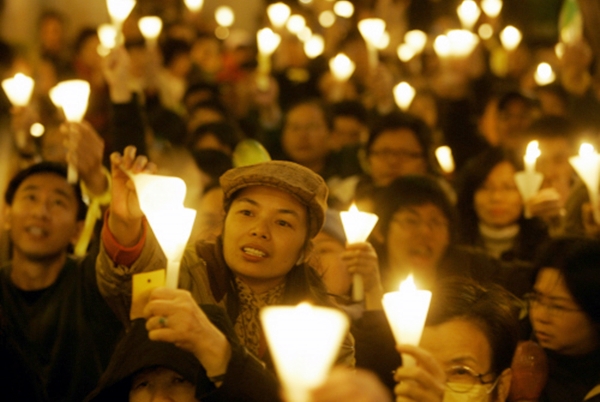 The message China’s leaders sent when they announced that they would have to approve any future elected leaders of Hong Kong should be heard loud and clear - not as much in Hong Kong as in Taiwan, where it really matters, and throughout the region.

Hong Kong isn’t just a unique entity within China, governed in theory by the principle of “one country, two systems.” It’s also a model of what Taiwan could expect if Chinese hegemony over the island it claims as its own were to become greater. China’s message to Hong Kong puts Taiwanese democrats in a difficult strategic bind in their attempt to assure their future. It also has consequences for American efforts to engage Asian allies who are growing economically closer to China each passing day.

China’s official policy toward Taiwan proposes the reincorporation of the island into the sovereignty of mainland China. When China formally explains what should happen to a Taiwan unified with the mainland, the model it provides is “one country, two systems” - the model it adopted in Hong Kong following its assumption of sovereignty from the British Empire in 1997.

This isn’t mere rhetoric. Although Taiwan is an independent, functioning, capitalist democracy, its Chinese character is an article of faith for Chinese Communist Party leadership and also for many ordinary Chinese. The nationalism of this claim to ownership makes Taiwan an especially important symbolic issue for the party, which must increasingly rely on nationalism to assert its governing legitimacy as economic growth inevitably slows.

Many Hong Kong-based democracy advocates have worked to maintain a degree of free speech and an independent judiciary, and to increase the range of elective democracy. Yet China has refused free elections - and the latest announcement makes it clear that this rejection is in effect permanent. Candidates for chief executive, Hong Kong’s highest office, will have to be approved by Beijing, with a criterion of “love the country, and love Hong Kong,” assuring party-friendly leadership for the foreseeable future.

The message to Taiwanese democrats is clear: China will not experiment with electoral freedom in the context of its unique satellites. China knows its behavior in Hong Kong will be watched in Taiwan, and must therefore have judged that any costs associated with the perception of its approach were outweighed by the benefits of limiting democracy.

From China’s perspective, it’s possible to see why electoral democracy in Hong Kong is risky. If elections worked well on a small scale, democracy activists on the mainland would be strengthened in their argument for greater electoral experimentation. Party leader Xi Jinping has already decided such a course would be disastrous for China - not to mention the continued rule of the party.

Optimistic Taiwanese might reason that their situation would be different than Hong Kong’s if they were to become part of China. Taiwan has a much larger population than Hong Kong. Unlike Hong Kong, which was formerly a crown colony without a full electoral democracy, Taiwan has also slowly developed fully democratic political institutions.

Still, neither of these factors would protect Taiwan from Hong Kong’s fate. Taiwan’s size makes it more threatening to mainland political norms. And its existing institutions would form an obvious counterpoint to party rule - which would make them unacceptable.

The knowledge that democracy cannot be preserved under Chinese rule leaves Taiwan’s democrats in a tough spot. Should they press for a formal declaration of independence now, potentially provoking China into confrontation but forcing the United States to reveal whether it would stand by them in a crisis? Or should they avoid angering China and hope to maintain the status quo as long as possible, hoping that future Chinese governments might be either less nationalistic or more democratic?

The latest Hong Kong development strengthens the case for taking the risk of promoting independence. China is signaling that it will not democratize even at the margins during Xi’s leadership. That means nationalism - Xi’s “Chinese Dream” - will continue to be an important source of legitimacy, and that in 10 years, China will probably only be closer to insisting that Taiwan become Chinese.

Meanwhile, the United States looks increasingly isolationist. Over time, the American public might be less and less willing to stand up to China over Taiwan. Such gradually weakening U.S. resolve would be a further reason for Taiwanese democrats to push for independence now.

For the United States, China’s message should be seen as an opportunity. As not only Taiwan but also South Korea and Japan deepen economic ties with China, it’s more and more crucial for the United States to define precisely why these countries are better off under U.S. military protection than they would be in the sphere of influence of a benign, economically focused China.

So far Chinese nationalism, especially in the seas around it, has kept Japan and South Korea skeptical. But China’s undemocratic governance, exported to Hong Kong and potentially someday to Taiwan, is also an important reason that Japan and South Korea should fear China. Notwithstanding the many defects of the United States’ regional hegemony, in the years since World War II these countries have become not simply rich but also democratic. Chinese hegemony will threaten that legacy - and the United States would do well not to let its Asian allies forget it.

* The author, a Bloomberg View columnist, is a professor of constitutional and international law at Harvard University.