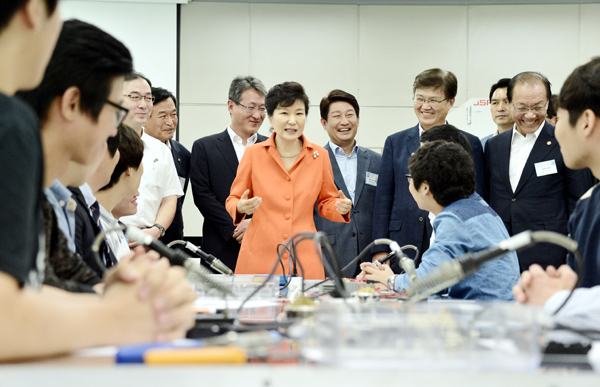 President Park Geun-hye, center, talks with students yesterday at a new renewable energy lab at Yeungjin College in Daegu during a trip to promote her creative economic agenda in the region. [NEWSIS]

The central government yesterday kicked off a part of its pledge to boost the Park Geun-hye administration’s creative economic drive, unveiling the collaboration between a local innovation center in Daegu and the country’s largest conglomerate.

The “creative economy” is one of the president’s signature policy directives that aims to transform innovative ideas into science- and technology-oriented business ventures.

The city yesterday celebrated the launch of the initiative, which sees Daegu’s existing innovation center - meant to foster local startups and business models - joining hands with Samsung Group, a move intended to drive the revival of the local economy.

Korea’s biggest conglomerate was established in Daegu, best known for its textiles and auto parts industries. The upgraded center is the first to engage with a major enterprise in a local industrial complex.

According to the Blue House, it is hoped that the partnership will help boost global opportunities for businesses in Daegu and help them find a foothold in foreign markets.

“The creative economy innovation center will become a space to realize the continuous circle of the creative economy - from challenge to success, and onto another challenge - and its philosophy,” President Park said in a congratulatory speech at the launch ceremony in Daegu.

The president, who has a bachelor’s degree in electronic engineering, compared the innovation center to the garages where the ideas that led to the formation of Silicon Valley were born and fostered.

“The founders of Apple, Google, Amazon, who are now spearheading global innovation, all began [in startups] in small garages,” she said, “I will provide support with creative economy innovation centers until they become the ‘garages of dreams’ that turn innovative ideas into technologies, products and businesses.”

The central government, which will ultimately oversee the collaborations, launched two innovation centers earlier this year - one in Daejeon in March and the second in Daegu in April - in an effort to push and expand the creative economy.

Park’s creative economic drive has long been criticized, and ridiculed at times for being “too abstract with no substance,” which led to the longstanding joke that the president is the only one who truly knows what the idea signifies. The Blue House hopes yesterday’s launch of the innovation center could dispel the fixed image surrounding Park’s signature policy.

After the Daegu center’s expansion with the participation of Samsung, Daejeon will follow suit with SK Group.

In a cabinet meeting on Sept. 2, government officials came up with and unveiled related plans in which large enterprises will join hands with creative economy innovation centers in 17 cities and provinces nationwide.

Busan’s local government will be tied to Lotte; Incheon will work with Hanjin; Gyeonggi with KT; Gwangju will be linked to Hyundai Motor; North Chungcheong to LG; and Seoul to CJ Group, for instance.

Conglomerates with ample production and marketing networks, capital and technologies could materialize the ideas and technologies of local start-ups and assist smaller ones in developing business models, pioneering sales routes and advancing into overseas markets.

Start-ups could also sell their innovative technologies or some of their shares to their bigger counterparts.

Under several agreements forged among the existing innovation center, Samsung and the Daegu government, Samsung Electronics will dispatch its workers to the creative lab it has established on the first floor of the Daegu Trade Center so that they can act as mentors for the staff of local start-ups.

The lab will include Samsung-developed software, smartphone applications and pilot products for visitors to test.

The partnership is expected to expedite the move by Daegu to accommodate more value-added industries, the Blue House said.

The Daegu government and Samsung yesterday also signed a memorandum of understanding to construct a so-called creative economic complex on a plot of land spanning 93,980 square meters in Buk District, southern Daegu.

Construction will begin in July 2015 and be completed by December 2016, with a budget of 90 billion won that Samsung will bankroll entirely.