Scotland stands at the crossroads

Scotland stands at the crossroads 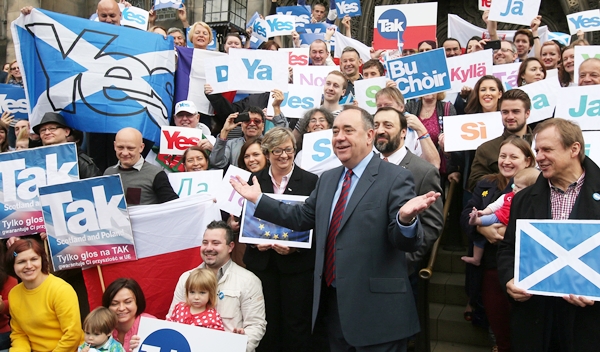 First Minister Alex Salmond meets with the public to celebrate Scotland’s European citizenship and its “continued EU membership with a Yes vote” in Edinburgh. [AP/NEWSIS]

Tomorrow, four million Scottish people will vote on whether Scotland should be an independent state.

In 1707, England and Scotland signed an agreement to become one nation. Now, Scotland stands at a crossroads and must decide whether to maintain the relationship that has lasted more than 300 years or end that union. Of course, even if Scotland chooses independence, it will have to endure the same kinds of serious challenges that former English colonies had to upon their freedom.

Scotland has maintained its own laws and legal system for the last three centuries. Moreover, the devolution of 1999 allowed Scotland its own parliament and government. The referendum was granted as the result of negotiations between the Scottish National Party, which won the Scottish parliamentary election in 2011, and the central government in London.

In the run up to the referendum, major political parties based in Scotland formed a coalition called “Yes Scotland” and campaigned in favor of independence.

Meanwhile, the Conservative Party, Labour Party and Liberal Democrats, representing the United Kingdom, want Scotland to remain in the union and launched the “Better Together” campaign. In opinion polls over the past two years, those opposed to independence have been in the majority. However, with the referendum date approaching, support for independence is rapidly growing.

If Scotland chooses independence in the referendum, it would face immediate economic problems. The three major parties that make up “Better Together” warned that Scotland, as an independent state, would have to give up the British pound. However, independence supporters argue that they would still be able to retain it.

Economic uncertainty in the United Kingdom resulted in a fall in the value of the British pound and the stock prices of companies based in Scotland.

Scotland can also not rule out the possibility that if gains independence, it would lose its status as a member of the European Union (EU), which it enjoyed as part of the United Kingdom. When Germany was reunified in 1990, East Germany automatically joined the EU. However, there is no precedent case of secession among EU member states. It is unclear whether Scotland can negotiate with the EU for membership status or whether it needs to be approved by all 28 member countries, like a new member. In the latter case, Scotland’s entry is likely to be denied. Countries like Spain, which is faced with Basque separatist movements itself, would not concur.

Another controversy is whether an independent Scotland can be a member of the North Atlantic Treaty Organization (NATO). The Scottish National Party’s anti-nuclear stance would be an obstacle to entry.

The United Kingdom could also find itself in an awkward position. Weakened national strength from Scotland’s separation could affect its permanent-member status on the UN Security Council. If the United Kingdom maintains a permanent seat, the United Nations would be hard-pressed to turn down requests by unrepresented powers such as Germany, India, Brazil and Japan as permanent members.

Most of all, the separation of England and Scotland symbolizes the end of the British Empire. When the two kingdoms united 300 years ago, the nation began to emerge as the center of world history.

In 1776, Adam Smith, a Scottish professor at Glasgow University, argued in the “Wealth of Nations” that the expansion of market size and the division of labor in a society were at the core of liberalist economic development. The merger of England and Scotland led to the growth of Britain’s national economy. As Ireland joined in 1801, Great Britain expanded globally.

Scotland is at the core of British identity. The marching band of soldiers dressed in kilts and playing bagpipes is a symbol of Great Britain. But it is a tradition of the Scottish Highlands, not England. Burberry, the most notable British fashion brand, is known for the trench coat, which is suitable for rainy weather, and the tartan pattern, a Scottish tradition. If Scotland becomes independent, these symbols might no longer be associated with the United Kingdom.

It is hard to predict the outcome of the referendum. But one thing is clear: The United Kingdom has failed to quell the complex discontent and frustration felt by the minority Scots, despite three centuries of shared history and identity.

England calls for a “Better Together” based on economic calculation, but it is doubtful whether economic benefit can override the Scots’ pursuit of pride, dignity and political separatism.

* The author is a professor at Soongsil University and the director of the Institute of Social Science.