North aims to reassert itself as sporting nation

North aims to reassert itself as sporting nation 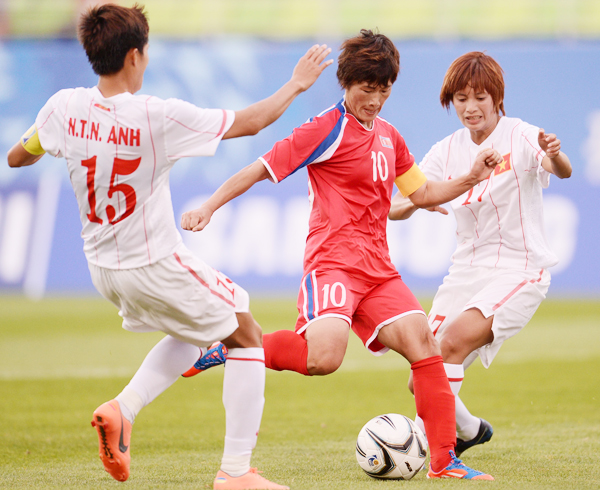 Most of North Korea’s 260 athletes and officials have arrived in the South to participate in the 2014 Incheon Asian Games, for which the opening ceremony will be held tomorrow at 6 p.m. at the Asiad Main Stadium.

With the goal of finishing in the top 10 by claiming more than 10 gold medals, the North sent its first group of 94 Olympic committee officials and athletes including football players and rowers earlier this month. A second group of 87 people including gymnasts and shooters, led by Pyongyang’s Olympic committee chief Kim Young-hoon, arrived Tuesday night.

More groups have yet to arrive to round out the total of 260 North Koreans who will be at the Incheon event, where the country will compete in 14 sports including football, weight lifting, shooting, judo, wrestling, table tennis and archery.

The North has shown its strength as an Asian sporting nation, taking fourth place three times at the Asian Games since its first appearance in 1974 in Teheran. But the country hasn’t impressed in the past decade, placing ninth in 2002 in Busan, 16th in 2006 in Doha, and 12th in the 2010 Guangzhou Games. But since their new leader Kim Jong-un began ruling the nation in 2012, the North has announced a series of plans to regain its sports competitiveness and wants to use the Incheon Asian Games to show the outside the world that it’s headed in the right direction.

And the North is off to a fine start. The men’s football team crushed China 3-0 on Monday and the women’s football team overpowered Vietnam 5-0 on Tuesday. The women’s team is one of the strongest gold medal contenders along with South Korea and China. The North didn’t even use the leading scorer, Huh Eun-byul, at last year’s East Asian Cup tournament until the 73rd minute. The women’s team won gold in the 2002 and 2006 Asian Games and has recently completed a generational shift to assemble a squad with an average age of 21.5 years.

“We’re here to win a gold medal,” said the North Korean men’s football team coach, Yun Jung-su. “We have prepared well for the event and will show our best performance during the event.”

The North is expected to win big in weight lifting. The team won three gold and one bronze in weight lifting in the 2012 London Olympics. Their star lifters are Om Yun-chol and Kim Un-guk in men’s weight lifting, and Rim Jong-sim and Ryang Chun-hwa in the women’s event.

Gymnast Ri Se-gwang will compete for a gold medal in the men’s vault against the South’s Yang Hak-seon, the 2010 London Olympics gold medalist. The team also wants to continue its success in women’s judo, in which the North claimed a gold and a bronze in London. Female marathoner Kim Kum-ok, the winner of last year’s Asian Marathon Championship, will race toward a golden victory as well.

Yesterday, North Korean athletes in football, swimming, gymnastics, shooting, weight lifting and rowing started training at Incheon, but the North requested it be closed to the public.