“Splendid but Sad Days,” takes the audience on a journey to Suncheon, a seaside city located in the southern part of the Korean Peninsula. The 70-something-year-old fisherwoman Yoon Wu-sook, left, is the documentary’s protagonist. Provided by Indie Plug

The film is the director’s first cinematic release.

Time seems to have stopped moving in Suncheon, but contrary to the area’s tranquil and nature-filled atmosphere, the documentary reveals the rattling story of some of the people who live there.

The 70-something fisherwoman Yoon Wu-sook and her alcoholic husband Cha Il-sun reside in a small village near the city called Hwapo.

Yoon is the breadwinner of the couple. Every day and night, she goes out to sea alone and comes back with a handful of seasonal fish.

The life of a fisher is said to be tough, but Yoon has been stubbornly at it for 50 years.

“If it weren’t for the sea, I wouldn’t have been able to live like this,” says Yoon in the film.

“The sea is what has gotten me this far.” 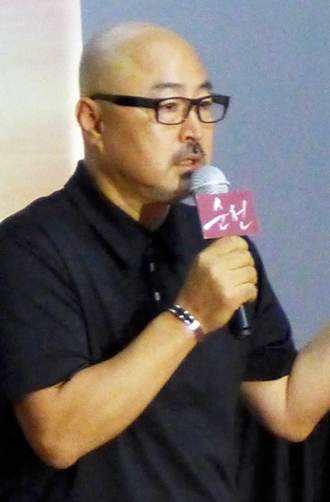 Yoon plays a vital role in the 64-minute documentary. Her robust, almost masculine appearance and raucous voice mixed with a strong dialect adds a sense of vigor to the movie’s slow pace.

“I am hot-tempered and I know it,” says Yoon. “But that’s the way I was born, I can’t do anything about it.”

Refusing to change is pervasive in Suncheon and its people, as shown in the film.

One notable scene sees Yoon and Cha head for the beach to paint bamboo sticks.

But it soon starts to rain and the senior couple find shelter in a shack. It starts to pour harder, and for the rest of the afternoon, the senior couple sit there obstinately, looking in the opposite direction and tossing words at one another from time to time.

It is gentle, comfortable and genuine, and also unimaginable in bustling cities like Seoul, where everything is goal-oriented.

Just like the name of Suncheon which is interpreted as “conforming to god’s will,” the locale and the people living in it mesh to convey this overriding theme in an incredibly natural way.

Director Lee said while his priority was to tell stories about people in his previous made-for-TV documentaries, he picked the setting first for “Splendid but Sad Days.”

“To a lot of people’s surprise, it was my first visit to Suncheon,” Lee said.

“I found so much vibrant life there as well as death. After picking the place as my film’s backdrop I looked for characters. I wasn’t thinking about having a female as the protagonist, but Yoon was too strong a character and also a very serious and frank one, too.”

It took six months of searching for the ideal protagonist before Lee finally found Yoon.

Suncheon’s breathtaking yet serene natural environment and the matching piano and string background music maximize the joy of watching the film.

As the film is dedicated to the city, it opened exclusively for Suncheon citizens on Sept. 4. Its wide release is on Thursday.