Korea in second after shimmering start

Korea in second after shimmering start 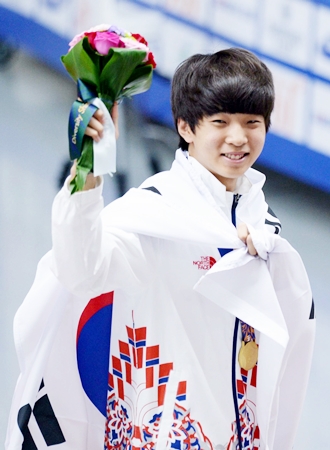 INCHEON - Korea got off to a solid start at the Incheon Asian Games with a series of golden performances over the weekend. Korea started the home event by winning five gold medals on Saturday then won six more gold as of press time yesterday.

A 17-year-old high school student, Kim Cheong-yong, was the most surprising star when he took two titles in men’s shooting, making him the first Korean at Incheon to win more than one gold medal. In the men’s 10-meter individual air pistol final held at the Ongnyeon International Shooting Range at 11:30 a.m. yesterday, Kim claimed a gold medal with a total score of 201.2 points, beating Korea’s shooting icon Jin Jong-oh, 35, who won gold in the 50-meter handgun and 10-meter air pistol at the 2012 London Olympics. Jin scored 179.3 points in the 10-meter event to win bronze, and Pang Wei of China scored 199.3 points for silver.

“I never expected that I was going to win a gold medal,” Kim said after the game. “Well, I’ve never had these kinds of shiny [golden] things in a big event like this … so I’m very happy. I also want to thank veteran teammate Jin [Jong-oh] as he has taught me so many things.”

Prior to the individual event, Korea’s team, consisting of Kim, Jin and Lee Dae-myung, also won the gold medal in the 10-meter air pistol team competition, shooting 1,744 points to beat second-place China by one point.

In the individual 10-meter, Kim took the lead by shooting 10.6 points in his first attempt and continued to scored more than 10 points until he struggled in his fifth and six attempts, in which he scored 9.6 points and 9.3 points each. But he managed to calm himself then extend his lead by shooting the event-high 10.9 points.

Jin, Korea’s shooting icon who has won many medals at the Olympics and in world championships, failed to win a gold medal in an Asian Games individual event, which he said was the final goal of his career. He also only won team gold medals in Guangzhou in 2010. 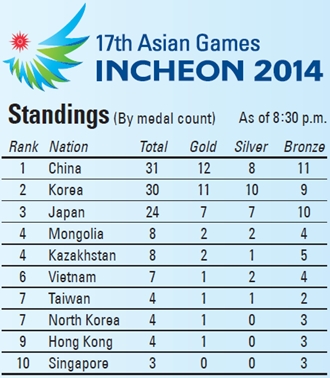 “Well, I feel sorry for fans because I couldn’t meet their expectations,” Jin said. “But I think [Korean] fans should be happy to see a young rising star [Kim Cheong-yong] appear in this event, so please celebrate the birth of a new hero.”

Korea’s first gold medal in Incheon on Saturday was won in wushu by Lee Ha-sung, who took the men’s changquan with a total score of 9.71 points, 0.02 point higher than Macau’s Jia Rui. It was Korea’s first wushu gold in an Asian Games since 2002 in Busan.

“I’m very happy not only for the result, but also because I’m seeing thousands of fans in the audience,” said Jung. “I’m very pleased that fencing is getting more popular.”

On Saturday, North Korea’s 23-year-old Hercules Om Yun-chol won his country’s first gold medal by setting a new world record to win the men’s 56 kilogram weight lifting. Om lifted a total of 298 kilograms; 128 kilograms in snatch and 170 kilograms in clean and jerk, in which he broke his own previous world record of 169 kilograms.

Om was only placed third after the snatch lift, outperformed by Vietnam (134 kilograms) and China (133 kilograms). But as he soon started his favorite event, clean and jerk, he set his game into winning mode, lifting himself to second place with 160 kilograms in his first attempt then cleaning 166 kilograms in his second attempt to win the event.

Then Om gave himself the ultimate challenge in his last attempt, deciding to try 170 kilograms, 1 kilogram heavier than his previous clean and jerk world record. In completing the lift, he became the first athlete to set a world record at Incheon and his total of 298 kilograms was an Asian Games record.