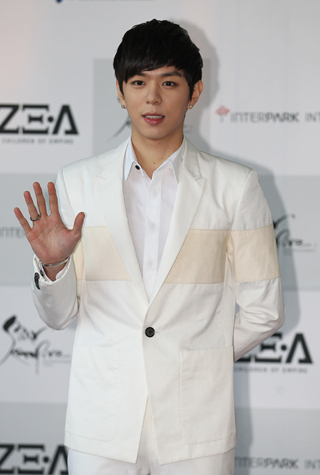 K-pop boy band Z:EA’s leader, Moon Jun-young, posted an apology on his Twitter account yesterday a day after he threatened to “drive a nail” into the heart of his agency’s CEO, in what appeared to be a financial dispute between the agency and the group.

Moon, 25, deleted all of his angry tweets from Sunday and uploaded a new set of regretful comments yesterday.

“Whatever I previously posted, we [ZE:A and our agency] will keep it to ourselves,” Moon wrote. “We cried a lot today and realized we can communicate through the heart. I’m telling you, I saw the tears [shed by Shin Ju-hak, the CEO of the agency].”

The message was uploaded with a photo of Shin’s name in Korean and his signature.

“From now on, we will work together as a team,” the press release read.

“I wanted to punish my boss in front of my fans and the general public,” Moon wrote in another tweet. “But after putting my thoughts into action, he looked so small.

From now on, ZE:A will protect Star Entertainment and CEO Shin Ju-hak.”

Moon wrote Sunday he would upload one file at a time in an attempt to disclose the mistreatment he endured at his agency.

“Where’s all the money our nine members earned bleeding and crying? Boss, tell me the truth with a hand on your heart,” he wrote. “I’m not Jesus, but I’m a child of God, and I’ll trust in God and start war.”