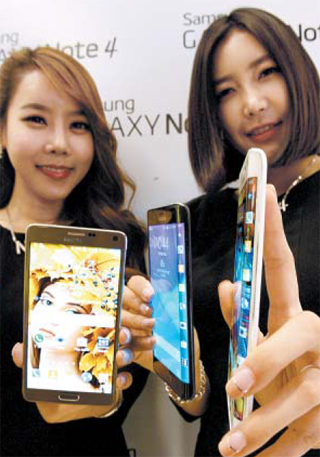 Samsung Electronics’ Galaxy Note 4, left, and the Note Edge with a curved display are shown yesterday at the company’s headquarters in Seocho-dong, southern Seoul. The Galaxy Note 4 will go on sale in Korea tomorrow and will be available in 140 countries by the end of next month. [NEWS1]

Samsung Electronics yesterday debuted the Galaxy Note 4 phablet that will go on sale later this month as the Korean tech giant competes against Apple’s new phones, including the iPhone 6 Plus, the American company’s first phablet.

The world’s largest smartphone manufacturer said that three Korean mobile carriers - SK Telecom, KT and LG U+ - will start selling the Galaxy Note 4 this Friday. The factory price for the wide-screen phone was set at 957,000 won ($920) in Korea.

Apple has not given a Korea release date for the iPhone 6 or iPhone 6 Plus, although it’s expected to be sometime in October.

The Galaxy Note 4 was first unveiled at the IFA consumer electronics show in Berlin earlier this month. Samsung originally planned to start sales of the premium smartphone next month, but moved the date up.

The new phablet will also go on sale in China at the end of this month. This is the first time the Korean tech giant has released its flagship smartphone in China before other major markets.

Apple has yet to start selling its new phones in China.

The Note 4’s release date for the United States is slated for Oct. 17. Samsung said the fourth model of the Galaxy Note series will be sold in some 140 countries by the end of next month.

“We can’t reveal a sales target for the Galaxy Note 4,” said Lee Don-joo, who heads sales and marketing for Samsung’s mobile division, at a launch event at the company’s headquarters in Seocho-dong, southern Seoul. “However, as preorder numbers are good, we expect better results than for the Galaxy Note 3.”

Samsung’s quick release in China signals that the company is eager to reinforce its presence there. The company is being squeezed between rapidly growing Chinese players like Xiaomi, Huawei and Lenovo and top rival Apple with its new, bigger phones.

“We have premium products like the Galaxy Note 4, but we also have a low-priced product lineup,” said Lee. “We will actively focus on each consumer, country and product category.”

Apple has recorded 10 million in sales of the iPhone 6 and 6 Plus in the first three days after the phones went on sale. The screen size for the iPhone 6 Plus was increased to 5.5 inches, which is 0.8 inches larger than the iPhone 5.

The Galaxy Note 4 is slightly larger than the iPhone 6 Plus, but Samsung claims the model’s competitive edge comes from its unique stylus, the S Pen. The company said it has upgraded the experience of inputting content with the stylus.

“Other competitors are also introducing large-screen phones, but the large screen needs to have a purpose and should absorb users when they consume multimedia on the phone,” said Lee Young-hee, a marketing team chief for Samsung’s mobile division. “Samsung Electronics has an advantage in the S Pen, which allow users to do more creative and productive work.”

The other enhancement for the Galaxy Note 4, which will use Google’s Android KitKat 4.4 operating system, is a quad HD super active mode organic light-emitting diode (Amoled) display. It is also equipped with a 16-megapixel camera in the rear and a 3.7-megapixel camera at the front.

For Korean consumers, Samsung said it is reinforcing its entertainment services. Samsung is facing increased competition in the domestic market as China’s Huawei will start selling phones in Korea starting next week. Domestic rival LG Electronics is also expected to release a 5.9-inch smartphone next month.

Samsung also wants to focus more on its software division. One attempt is a music application called “Milk” that provides 3.6 million songs and 220 music channels for free. The service was first introduced in the United States in March, and has so far recorded four million downloads.

The flagship company of Samsung Group said it is also introducing an application called “Papergarden,” a digital magazine service that was previously available on the Galaxy Tab S tablet. It will provide 27 magazines for free through the end of this year.

Besides the Galaxy Note 4, Samsung also introduced various devices for the first time in Korea.

The Galaxy Note Edge is highlighted by a separate curved display on the side that shows text, can be used as a dock or even become an alarm clock. It is expected to go on sale from mid-October.

Analysts said that the stock plunge was due to concerns about the company’s third-quarter performance, especially for its IM (Information Technology and Mobile Communications) business.