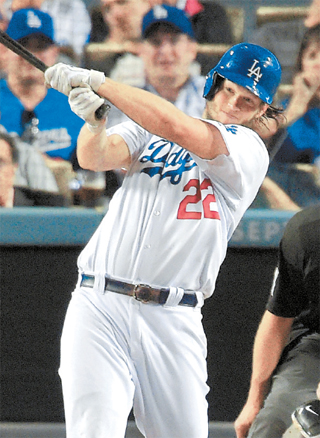 Clayton Kershaw of the Dodgers hits his first career triple in the fifth inning Wednesday against the San Francisco Giants. Kershaw drove in Car Crawford to tie the game at 1-1. [AP/NEWSIS]

Clayton Kershaw strode into the Los Angeles Dodgers clubhouse with a rare demand.

Kershaw tied a career high with his 21st victory and Yasiel Puig homered to highlight a four-run sixth inning as the Dodgers claimed their second straight division title behind their ace (21-3), who has been the catalyst behind their success this season.

Kershaw wasn’t perfect - getting called for a balk and unleashing a wild pitch - and he committed a throwing error in the seventh, but he did a little bit of everything, including an RBI triple, to ensure the Dodgers celebrated in front of their longtime rivals.

“He probably wasn’t at his best, but him at 80 percent is pretty good,’’ said Giants starter Tim Hudson. “It’s better than most people.’’

Kershaw allowed one run and eight hits in eight innings, struck out 11 and walked none in his last start of the regular season, having won his final seven. He is trying to become the first pitcher to lead the majors in ERA (1.77) for four consecutive seasons.

“He’s so tough, what a year he’s had,’’ said Giants Manager Bruce Bochy. “You’ve got to play perfect ball to beat him and hope you get a timely hit, and we didn’t do it.’’

“MVP’’ chants directed at Kershaw from the sellout crowd of 53,387 broke out throughout the game, but grew loudest after he retired the side in the eighth, striking out two.

Juan Uribe went 2 for 4 and drove in three runs, and Carl Crawford was 2 for 2 with three runs scored and two RBIs for Los Angeles.

The Dodgers snapped a 1-1 tie in the sixth, with Puig hitting a leadoff homer off Hudson (9-13) to get things started. Crawford’s two-run double off Javier Lopez made it 4-1 and Uribe followed with an RBI single off Jean Machi for a 5-1 lead.

Puig showed off his arm in the top of the seventh. Pinch-hitter Matt Duffy singled to center, where Puig grabbed the ball, spun around and fired to third, nailing a sliding Gregor Blanco.

The Dodgers tacked on four more runs in the eighth, when Giants pitchers walked four batters and hit another.

The loss again kept the Giants from clinching a playoff berth.

Hudson gave up three runs and five hits in 5 1/3 innings, struck out four and walked one.

Kershaw tied the game 1-1 with his first career triple in the fifth, scoring Crawford, who got hit in the left foot by a pitch and then stole second. Kershaw chugged into third base standing up.

The Giants led, 1-0, when Hunter Pence grounded into a fielder’s choice along the third base line in the third. Joaquin Arias scored from third, narrowly beating the throw from Uribe.

Kershaw had a bit of a messy third, when he allowed four base runners. With runners on first and second he was called for a balk, allowing the runners to move up. Kershaw showed quick reflexes facing his next batter. Hudson hit a comebacker and Kershaw, down on his right knee with his back toward the plate, reached around, backhanded the ball and threw to first for the out.

Kershaw gave up a pair of two-out singles in the sixth and the runners moved up on his wild pitch. He induced a groundout to the mound from Chris Dominguez to end the inning.
AP