Director taps into own experience for adult film

Director taps into own experience for adult film 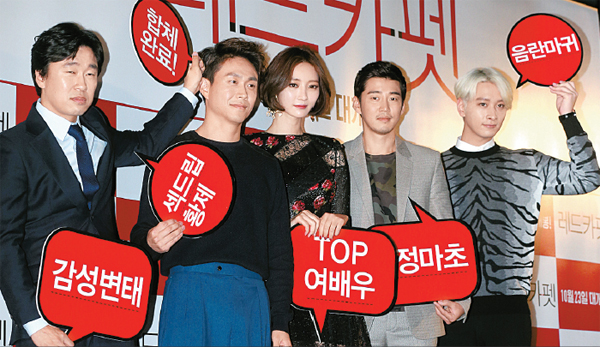 Sometimes, things don’t turn out the way people expect. Nonetheless, they get on with their lives, finding joy and happiness along the way.

Filmmaker Park Bum-soo aims to provide reassurance to these kinds of individuals through his upcoming film “Red Carpet,” which is about a group of people who unexpectedly end up working in the pornographic film industry.

The synopsis is roughly inspired by the director’s personal life.

“I set foot in the movie industry about 10 years ago because I loved movies” said the filmmaker at a press conference held Monday at Apgujeong CGV in southern Seoul.

“But the next thing I knew, I had made nearly 300 adult films, none of which I could watch with my parents.”

Looking back on how he spent his youth and to reflect on how closely he has gotten to his dream, Park decided to tell his story for the many others who have doubts about their lives.

Acknowledging that the adult film industry triggers curiosity in a lot of people, the director decided to use it as the film’s prominent subject matter.

Actors Yoon Kye-sang and Oh Jeong-se play a director and assistant director, respectively, in the movie, who churn out lewd films once a week.

The duo get sick and tired of making films that only do well online, so they lure a top actress into one of their productions, dreaming of a box office hit.

In agreement with Oh, actor Yoon added that he really liked how the director tried to depict what it’s truly like for people in their 20s or 30s, who go back and forth between their dreams and reality.

“Many will find the movie different from what they expected once they see it,” said director Park.

The film has been rated 15 by the Korea Media Rating Board and opens in local cinemas on Oct. 23.