North’s nukes are not only priority

North’s nukes are not only priority 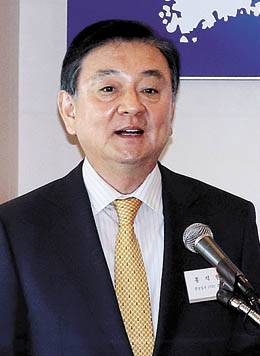 Ending North Korea’s nuclear program should not always be the top priority when dealing with the reclusive Communist regime, Hong Seok-hyun, chairman of the JoongAng Media Network, said yesterday, suggesting that step-by-step long-term efforts be taken to resolve the crisis.

Hong made the proposal in his keynote address at a conference hosted by the Korea Forum for Peace, Prosperity and Unification.

At yesterday’s event, which centered on reducing tensions and building peace on the Korean Peninsula, he further stated that a new perspective was necessary to resolve the security situation for both nations.

Four experts, including Jun Bong-geun, a professor at the Korea National Diplomatic Academy, also shared their views yesterday at the conference.

The forum was launched in 2011 to find alternatives to issues concerning the Korean Peninsula by going beyond conventional conservative and progressive thinking or pro-America and pro-China positioning.

The JoongAng Media Network, including the JoongAng Ilbo, JTBC and the Korea JoongAng Daily, has supported the forum since its creation and Hong serves as its adviser.

Hong added that the paradigm in which inter-Korean relations are defined must be changed, and that a new perspective was necessary to reduce political and military distrust.

“To this end, we must put forth effort to prevent the current confrontation between the nuclear program and military pressure from becoming a structural problem,” Hong said. “For example, we must reconsider treating the resolution of the nuclear crisis as top priority over all other issues.

“The North has continued its nuclear development over the past 20 years despite many hardships, and it is unreasonable to think that the North will give up its nuclear arms in return for some economic compensation and an ambiguous guarantee concerning the security of its regime,” he continued. “So we need to make a new decision.”

Hong said the nuclear issue must be treated as a long-term task, made step by step. First, he said, it must be proposed that Pyongyang freeze its nuclear program and transparently reveal its nuclear arsenal to resolving the security crisis.

The complete end of the nuclear crisis must be defined as the point when peace is established permanently on the peninsula and the two Koreas have seen progress in mutual prosperity, he said.

Hong also warned that in hurrying to end the nuclear crisis, all the alternatives other than the collapse of North Korea would become useless.

Noting that the reclusive state’s collapse would lead to catastrophe on the Korean Peninsula as well as in Northeast Asia, Hong urged that wisdom was needed to avoid such a scenario.

South Korea should take initiative so that the two Koreas can lead nuclear talks and other matters on the Korean Peninsula, he said, rather than relying on China and the United States. He urged the experts to think about what agreements and measures were needed for the nuclear crisis and to discuss peace and cooperation between the two Koreas.

“The North has refused to discuss the nuclear issue with the South, but I believe we can change that,” Hong said, adding that Pyongyang has increasingly made efforts to engage the West.

“I believe the North will soon reach out to the South, and we must prepare for that.”