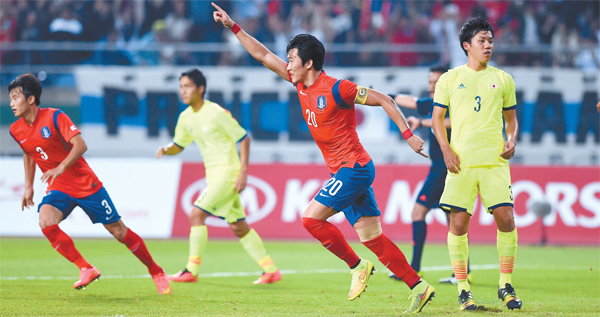 Going for its first gold medal in men’s football in the Asian Games in 28 years, Korea beat Japan, 1-0, last night on a penalty kick by team captain Jang Hyun-soo in the 87th minute. The home crowd of about 43,00 erupted after the goal in the quarterfinal match at the Munhak Stadium.

Next up for Korea is a semfinal date with Thailand tomorrow night.

Coach Lee Kwang-jong used the same lineup he started with against Hong Kong in the Round of 16 on Friday, operating his favorite 4-2-3-1 formation by putting forward Lee Yong-jae on top of the offense line, backed up by midfielders Lee Jae-sung, Kim Seung-dae, and Kim Young-uk.

Park Joo-ho of FSV Mainz 05 and Son Jun-ho were the defensive midfielders in front of defenders Rim Chang-woo, Kim Min-hyeok, Kim Jin-su and Jang Hyun-soo. Kim Seung-gyu was in goal.

Korea’s best attacking options, 196-centimeter (6-foot-4) striker Kim Shin-wook started as a substitute and Yoon Il-lok was not available to play. Both suffered injuries in the Group A preliminary match against Saudi Arabia.

The first half ended 0-0 as aggressive midfield challenges by both teams limited scoring chances.

Japan dictated the action during the first 10 minutes with accurate passes and quick counterattacks led by forward Suzuki Musashi. Momentum started to shift in the 14th minute, when defender Kim Jin-su delivered a pass toward Lee Yong-uk in Japan’s goal area that was cleared.

Korea earned a better scoring chance 14 minutes later. A Japanese defender missed the ball with his left foot when the ball was crossed by Rim Chang-woo of Korea to the goal area, giving a chance for forward Lee Yong-dae against Japanese goalkeeper Niekawa Ayumi. Lee fired a shot from the left edge of the goal area, but it was cleared.

With about five minutes remaining and fans starting to think about extra time, Korea earned its best chance when the referee called a penalty kick after a Japanese defender fouled Lee Jong-ho in the box.

Jang put the ball into the upper right corner of the net, and Korea was one step closer to its ultimate goal.