Rooney records a goal and red card in 2-1 win

Rooney records a goal and red card in 2-1 win 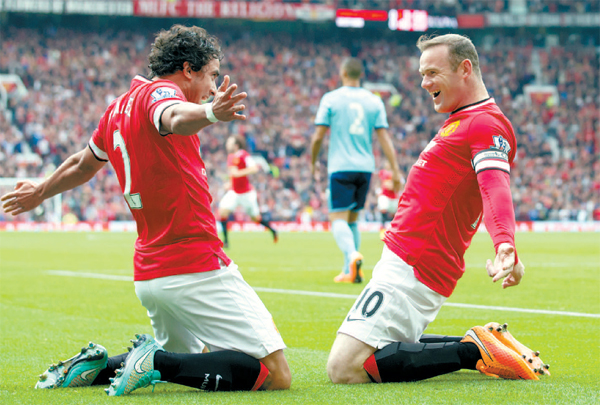 The two sides of Wayne Rooney were on display Saturday as the Manchester United captain scored before being sent off for a reckless challenge.

The goal, though, set United on its way to a 2-1 victory over West Ham, giving Louis van Gaal just his second league win as United manager.

“I could imagine why he did it, but I think you have to do it more friendly,’’ said Van Gaal said of Rooney’s first United red card since 2009 for kicking out at Stewart Downing. “In professional football, you make these faults, but I also saw them from West Ham. They weren’t punished like Wayne.’’

Chelsea remains the leader after overwhelming Aston Villa 3-0, and Frank Lampard made it four goals in three games for Manchester City to complete the champions’ 4-2 win at Hull.

There were stalemates in the day’s two derbies, with Arsenal-Tottenham and Liverpool-Everton both 1-1 draws. Sunderland remains winless after drawing 0-0 with Swansea, while Fraizer Campbell and Mile Jedinak gave Crystal Palace a 2-0 win over Leicester.

Like Palace, United is eight points adrift of Chelsea, but it could have been worse had the hosts not managed to hold on against West Ham.

The game had started so well for Rooney at Old Trafford, meeting Rafael da Silva’s cross after just five minutes and volleying into the net. Robin van Persie doubled United’s advantage in the 22nd with an angled shot after being set up by Ander Herrera.

But West Ham pulled one back before halftime through Diafra Sakho’s header, and United was reduced to 10 men in the 59th minute when Rooney was shown a straight red card.

“I have said to the lads, ‘You have been rewarded today because you fought until the end,’’’ said Van Gaal.

United is likely to be without Rooney until November due to a three-match suspension that would include a match against Chelsea.

Chelsea is setting the standards so far this season, largely due to Diego Costa’s contribution since joining from Atletico Madrid.

Chelsea was already leading from Oscar’s early tap-in when the Spain striker headed in his eighth goal in six league games in the 59th and then set up Willian to complete the win over Villa.

In the northeast at Hull, Man City didn’t have it so easy after throwing away a two-goal advantage secured inside 11 minutes by Sergio Aguero and Edin Dzeko.

Hull was gifted a route back into the game when defender Eliaquim Mangala headed an own-goal past goalkeeper Willy Cabellero, who replaced dropped Joe Hart. Abel Hernandez leveled from the penalty spot in the 32nd after being recklessly tackled high by Mangala.

But City fought back in the second half, with Dzeko grabbing a second from close range and Lampard side-footing in the fourth.

At Anfield, Everton failed to win its first away Merseyside derby in 15 years but Everton defender Phil Jagielka’s stoppage time leveler made it feel like a win.

Jagielka unleashed a half-volley from outside the penalty area just when it appeared captain Steven Gerrard had secured Liverpool’s win with his ninth derby league goal. Gerrard curled a free kick into the net in the 65th minute, with goalkeeper Tim Howard getting a touch to the ball but he was unable to keep it out.

In the north London derby, Nacer Chadli latched onto Erik Lamela’s pass to put Tottenham in front in the 56th. But after Lamela’s sloppy clearance, Mesut Ozil’s cross was turned into the net by Alex Oxlade-Chamberlain six minutes later. AP