In the shadow of medal-winning giants

In the shadow of medal-winning giants 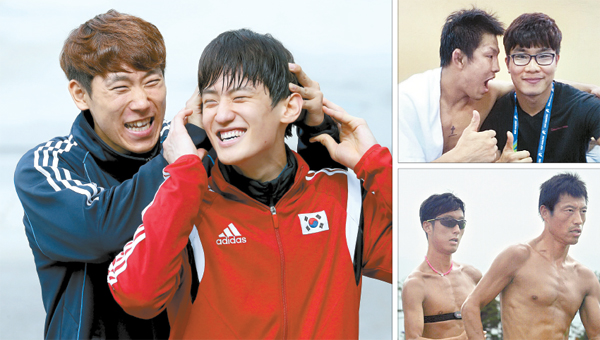 Clockwise from left: Lee Dae-hoon, right, who will compete tomorrow in the men’s 63-kilogram division in taekwondo and his training partner Cho Won-yong; judoka Kim Jae-bum, left, who has won two gold medals, and his partner Lee Jeong-min; racewalker Park Chil-sung, right, and his pacemaker Kang Gil-dong. By Shin In-seob

Light always coexists with shadow, and if star athletes in the 2014 Incheon Asian Games are the light, their training partners who work behind the scenes helping them perform their best are the shadow.

But the training partners don’t share the moments of glory because the spotlight is reserved for medal-winners. What pushes them to continue in their unseen role is the hope that they will one day make the podium just like their teammates.

Taekwondo player Cho Won-yong of Yongin University is a teammate of Lee Dae-hoon, 22, who will compete tomorrow in the men’s under 63 kilogram. Cho has won many local competitions, but his successes are eclipsed by Lee, who was a silver medalist in the men’s under 58-kilogram division at the 2012 London Olympics.

National team athletes usually pick a person younger than them who attended their university as their training partner because asking for a lot of favors from someone who is older, especially ahead of a big event like the Asian Games, isn’t culturally acceptable in Korea.

But that didn’t stop Lee from asking Cho, one of his best friends at school, to be his training partner, as he thought it would allow him to have serious conversations about every possible issue related to training.

Months ahead of the Incheon Games, Cho worked like a professional coach. He watched hundreds of video clips to study the playing style of Lee’s potential opponents and adjusted the training tempo so Lee wouldn’t get injured before the main event. Whenever Cho saw Lee acting tired or lazy, he encouraged his teammate, “Come on! Is this all you got? Show me a clean and strong kick!”

When the JoongAng Ilbo met Cho last week at the Taereung National Training Center in Nowon District, northeastern Seoul, he said he wished Lee the best of luck. “I think I would feel like I won a gold medal if Lee wins the event,” he said. “I will watch his matches at the scene.”

Kim Jae-bum, one of the strongest judokas in the world who holds a grand slam title (winning the Asian championships, Asian Games, world championships and Olympics) didn’t train on his own. The 29-year-old won the men’s 81-kilogram competition last week, and one of the people who contributed most to his success was his training buddy Lee Jeong-min, 24, of Yongin University. They both graduated from Dongji High School in Pohang.

“I was so impressed every time we trained together because he didn’t waste a second,” Lee recalled. “I worried about Kim because I was one of very few people who knew about his finger injury. I watched all his performances at Incheon and was so amazed when I saw him win two titles [individual and team event].”

Lee said that while practicing, they talked a lot about judo techniques.

“We tested ourselves again and again to find the perfect timing for an attack,” he said. “As an athlete, I also wanted to compete in front of the home crowd, but I learned a lot from the training I had with Kim. He is like a god to me, but I will take his spot one day in the future.”

The training partner for boxer Han Soon-chul, the silver medalist in the men’s 60 kilogram at the 2012 London Olympics, was 19-year-old prospect Lim Hyun-seok of Daejeon University. They competed against each other for a spot on the national team, but Lim couldn’t beat 30-year-old veteran Han.

“Every time I felt tired, I just tried to play harder,” Lim said. “But after I saw how much Han enjoys boxing, he totally changed my mind-set. I want to compete in the 2016 Olympics and want to stand on the podium.”

In racewalking, Kang Gil-dong, 23, was the pacemaker for Park Chil-sung, 30. He said his goal was to help Kang set a steady walking rhythm.

In training for the 50-kilometer race (about 31 miles), he let Park walk alone for the first 20 kilometers, the point when an athlete generally starts getting tired, then he joined in to force Park to adjust his speed.

“It has been a long time that we have been training together,” Kang said. “I’m trying to make those tips and techniques I learned from Park mine as soon as possible, so I can represent the country in the future.”