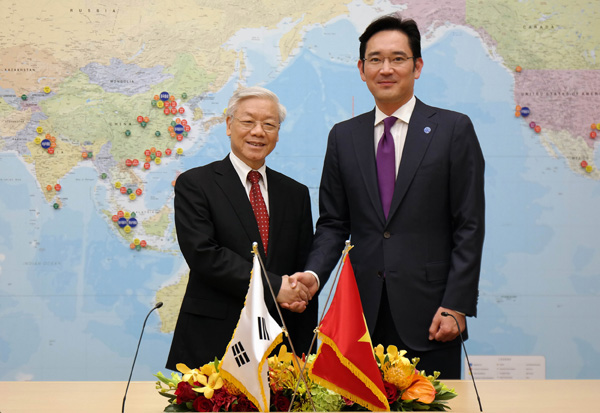 The world’s largest phone maker said the Samsung CE complex in Saigon Hi-Tech Park will be built on a 700,000-square-meter (173-acre) site.

The company didn’t announce a construction schedule, but industry insiders speculate work will get under way early next year, with production starting in mid-2016.

The announcement was made after Nguyen Phu Trong, general secretary of the Communist Party of Vietnam, delivered written investment approval to Jay Y. Lee, vice chairman of Samsung Electronics, on Wednesday evening.

The meeting, in which Nguyen and Lee discussed further cooperation, was the first stop of the party leader’s four-day visit to Korea. The Vietnamese government reportedly promised to exempt the new complex from corporate tax for six years and will impose a 5 percent tax thereafter.

Samsung Electronics said the investment decision was made to meet rising demand for consumer electronics and maintain the company’s No. 1 position in the television business.

The Korean tech giant said that despite increasing competition, its share of the global TV market was 30.7 percent in the first half of this year, up 3.9 percentage points from 26.8 percent a year ago, citing data from market researcher Display Search.

Samsung has been pushing investment in Vietnam. It is estimated that Samsung Group affiliates, including Samsung Electro-Mechanics and Samsung Display, have invested or are planning to invest a total of $8 billion in the country.