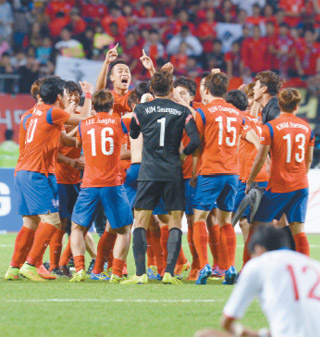 This U-23 national football team was considered the weakest in the history of the Asian Games. The squad led by Coach Lee Kwang-jong had no big-name star after failing to bring in Bundesliga midfielder Son Heung-min. They also lost their best attacker, Kim Shin-wook, for most of the tournament due to injury. Football analysts and fans alike worried that winning a gold medal for the first time in 28 years would be unlikely.

Yet with the clock at Munhak Stadium winding down and fans starting to think about a shootout between South and North Korea on Thursday to decide the gold medal, the South had one last chance to score on a corner kick. The shot by forward Lee Yong-jae looked like it was going into the net until it was cleared by a defender. But the ball ended up in front of Rim Chang-woo, who used his right foot to blast it into the right side of the net and give South Korea its fourth Asian Games football gold.

The victory was especially sweet given the national team’s recent struggles. Korea was eliminated from the first round of the 2014 Brazil World Cup with one draw and two losses and its FIFA world ranking fell to 63rd in September. The country had not won an Asian Cup title in 54 years.

In the last three Asian Games appearances, each team had a big-name superstar. The 2002 team was led by “Lion King” Lee Dong-gook, the 2006 squad by Lee Chun-soo and the 2010 edition by Park Chu-young, a former Arsenal attacker.

But midfielder Park Joo-ho of FSV Mainz 05 disagreed with those who didn’t expect much. “We are much stronger than people think,” he said. “Our team spirit is stronger than the teams in the past.”

“Forward Lee Yong-jae, who started matches after Kim was sidelined, got a lot of criticism from fans for blowing many scoring chances,” said a spokesman for the Korea Football Association. “And that was when Kim started teaching Lee how to play inside the penalty box at the National Football Center. Lee didn’t hesitate to learn from Kim and started getting better. That was why Coach Lee Kwang-jong trusted him and didn’t rush Kim back on the field.”

KFA staff who watched the team closely during the tournament said players looked like they weren’t thinking about the military duty exemption given to Asian Games gold medalists.

“We should play for the country’s pride and honor, not for individual glory,” Kim Shin-wook told his mostly younger teammates.

“We didn’t say a word related to the military during the tournament,” said captain Jang Hyun-soo. “We focused only on our play.”

The Taegeuk Warriors stuck together as a team. Each member tried to run more than his teammate under tough training schedules, and such sacrifice and effort paid off as Korea finished the Asian Games with 13 goals in seven matches, while allowing none.

“It’s true we didn’t have a superstar,” said Park Joo-ho. “But we were the best as a team.”