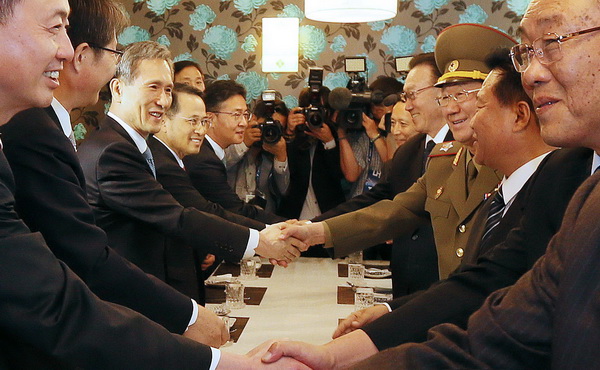 Top officials of the two Koreas meet for a rare meeting at a restaurant in Incheon. Kim Kwan-jin, national security director of the Blue House, third from left, and Hwang Pyong-so, the top political officer of the North Korean People’s Army, third from right, shake hands at the meeting.

Hwang Pyong-so, director of the General Political Bureau of Pyongyang's Korean People's Army, Choe Ryong-hae, a secretary of the Workers' Party's Central Committee, and Kim Yang-gon, a governing party secretary, were among the delegation.

Hwang is a rising star in the North's power elite. Known to be one of the closest confidants of North Korean leader Kim Jong-un, Hwang was recently appointed to the post of vice chairman of the National Defense Commission.

The North Korean officials departed Pyongyang at 9 a.m. and arrived at Incheon International Airport around 10:10 a.m., the Unification Ministry said.

The ministry said Pyongyang informed Seoul of their travel plan Friday morning and Seoul accepted it later in the afternoon.

They will attend the Asian Games' closing ceremony at 7 p.m.

The delegation will return to the North around 10 p.m.