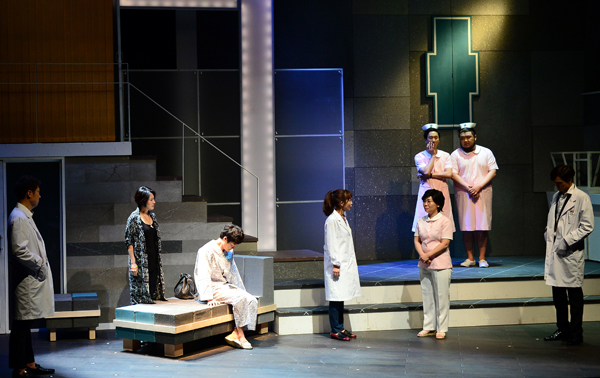 Film director and LGBT activist Kim Jho Kwang-soo’s latest production, the rom-com musical “Two Weddings and a Funeral,” runs through Nov. 30 in Daehangno, central Seoul, with an age restriction of 13 and over. [NEWSIS]

When Kim Jho Kwang-soo came out of the closet nearly a decade ago, his mother burst into tears, apparently out of grief from the pain and discrimination she was sure her son would face in a society she deemed too conservative for him to live in.

But Kim, now age 50, recalled brushing off her pity.

A decade on, however, Kim said matters haven’t improved much for members of Korea’s LGBT community. This is despite some gay celebrities publicly announcing their sexuality - such as entertainer-actor Hong Seok-cheon, 43 - in order to fight for equal rights. 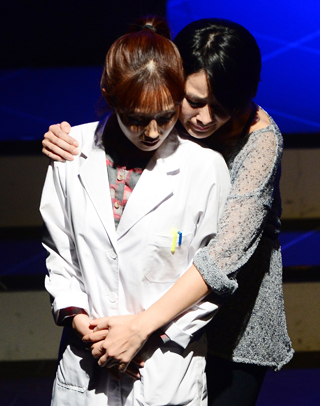 Actresses Cha Soo-yeon and Lee An-na act in a scene during “Two Weddings and a Funeral.” [NEWSIS]

Korea has yet to legally acknowledge same-sex unions.

Nevertheless, Kim is positive that the country, where Confucian ideals are still heavily embedded, will steadily pick up momentum in the future. And as a filmmaker, he hopes to provide impetus to speed up that transformation.

Kim introduced his latest Korean-language production, a musical titled “Two Weddings and a Funeral,” during a press showcase on Thursday in Daehangno, central Seoul.

The show is a remake of the director’s gay rom-com of the same title, released in 2012, which was seen by roughly 50,000 people. The film spun off into a Web cartoon series and is now a play that intertwines singing and dancing.

“Through music, I wanted to illustrate the very enthusiasm of gay communities,” said Kim Tae-hyeong, the producer, adding that the musical plays a “chief role in expressing the joys and sorrows homosexuals feel.”

The plot revolves around two gay individuals, a physician named Min-su and his colleague, the obstetrician Hyo-jin, who agree to a sham marriage so that both can enjoy their lives without social stigma getting in the way.

For Min-su, marriage is an opportunity to escape from his protective parents, who worry that their son isn’t settling down, and a disguise to maintain his closeted lifestyle. He falls in love with Ti-na, who works as a greengrocer during the day and sings in a band at night. Ti-na has yet to come out of the closet, either.

Hyo-jin, meanwhile, hopes to legally adopt a baby before divorcing Min-su to live with her lover of six years, Seo-yeong, a documentary filmmaker. Stage actors Jeong Dong-hwa and Park Seong-hun are double-cast as Min-su, and Ti-na is played by Kang Jeong-woo and Oh Eui-sik. Cha Soo-yeon and Son Ji-yoon share the role of Hyo-jin, and Lee An-na plays Seo-yeong.

As for the matter of physical contact, a gay couple gently pressing their lips together is as far as it goes.

But in grasping the essence of the show - that homosexual couples are not unlike heterosexual pairs - words and facial expressions seem to have played a more crucial role.

“There’s absolutely no need to pity homosexuals,” said Kim, the director. “All I’m asking is for people to come watch the show, and leave having understood that gays are just living a bit uncomfortably in a sea of straight people.”