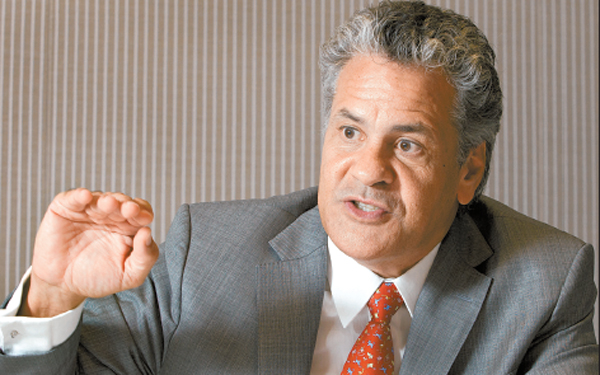 “Korea is a market where diverse partnerships and projects get under way,” says Patrick Bergstedt, president of MSD Asia Pacific. Provided by the company

Korea accounts for only 2 percent of the world’s pharmaceutical market, but it has been selected as one of 10 priority countries by Merck Sharp & Dohme (MSD) as part of a global initiative to target areas of high growth potential.

Patrick Bergstedt, president of MSD Asia Pacific, said Korea is one of the fastest-growing markets where “unmet medical needs” exist. MSD Korea has released 19 first-in-class pharmaceuticals and vaccines for such conditions as diabetes, cardiovascular disease, human papillomavirus (HPV) and shingles. MSD Korea also has forged partnerships with a number of local companies and engaged in projects to develop and commercialize biosimilar medicines with Samsung Bioepis.

The Korea JoongAng Daily sat down with Bergstedt to discuss MSD’s operations in Korea.

Q. How did Korea become one of the top 10 markets?

A. When MSD looks at countries to be selected as a top 10 market, we consider a number of criteria. One point is our company’s position in the countries. We have a very strong position in Korea with good business growth. First, the market is attractive. When we look at the line of products, including medicines and vaccines, there is a good fit between those products and the needs of Korean consumers. The country is a rapidly aging country and an increasing number of Koreans have developed diabetes, cancer and cardiovascular disease. These are important diseases on which the Korean government is focusing. At the same time, MSD specializes in these diseases. So, there is a good fit.

And there also is a good opportunity for future growth. We see Korea as a market where we can effectively work with different partners and the government and get good pricing and reimbursement. We also have forged good partnerships with different hospitals and research institutes for clinical trials and research. So the overall environment in Korea is conducive to our growth.

Can you talk more about MSD’s position or its growth in Korea?

MSD has operated in Korea for 20 years. If you look at the performance of the Korean office in the past five or six years, we have gone from being the seventh-largest pharmaceutical company to number two. So in a very short time, MSD’s positions have changed dramatically.

The driving force behind that success is a series of relevant new medicines. Over the history of the company [MSD Korea], we’ve introduced about 77 medicines and vaccines. Another factor is the people who work for this company. MSD Korea has been able to attract a competitive workforce. I don’t know the average age of the workforce here in Korea, but our 600-plus workers are relatively young. And there is a very good balance between men and women. It is a very unique aspect of Korea, because it is rare in other offices that women make up a significant percentage in the sales team. Some of our Korean workers - about 15 - now work abroad after their successful performance in the local office.

What are some of the latest partnerships?

Korea is a market where diverse partnerships and projects get under way. MSD takes a very strategic approach in selecting partners. So each partnership has a specific objective. Here, we established a partnership with Samsung Bioepis to develop biosimilars. MSD has a unique capability for Samsung from a commercial pharmaceutical perspective. So we will help Samsung commercialize biosimilar products globally. The partnership has important implications in Korea, because the government has said it is crucial to reduce the cost of medicine. And the biosimilars can play a key role in reducing the cost of medicines.

You are in charge of the Asia Pacific region. What is MSD’s regional approach?