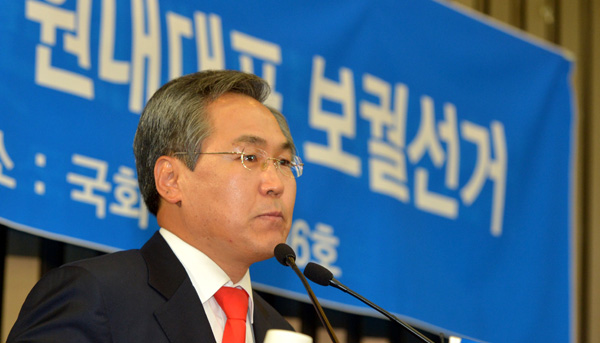 Rep. Woo Yoon-keun gives an acceptance speech in front of fellow opposition lawmakers after he was elected floor leader of the New Politics Alliance for Democracy yesterday at the National Assembly. [NEWSIS]


The opposition New Politics Alliance for Democracy (NPAD) elected Rep. Woo Yoon-keun as the floor leader yesterday, choosing a pro-Roh Moo-hyun faction member to set the tone of its policies for the next seven months.

Attention is now being drawn to how the NPAD, mired in factional conflicts, will emerge under Woo’s command to address the lingering issue of the special Sewol law as well as a myriad of issues, including economic stimulation policies and constitutional change.

“I will devote myself to making an opposition that acts with integrity and communicates with the people in a rational way,” said the new floor leader in an acceptance speech before fellow NPAD lawmakers after a vote at the National Assembly.

Mindful of self-inflicted wounds from past internal power struggles, Woo said in his acceptance speech that there will be no pro-Woo faction within the NPAD, and that there will only be one faction - an NPAD that will “negotiate with and fight against the Saenuri as a 130-member entity.”

“As I said in my acceptance speech, I will strive to communicate with and unite the party,” the 57-year-old lawmaker told reporters, adding he will also work hard to wrap up the issue of the special law to investigate the Sewol sinking in April.

In the first round, Woo, Lee and Rep. Rhee Mok-hee ran for what is considered the party’s No. 2 position following the party chairmanship, which is now held by interim leader Moon Hee-sang.

In the first round, Lee came out on top with 43 votes, with Woo trailing with 42 and Rhee with 33. Because none won a majority, or 60 votes, Lee and Woo went into a final round. As the final figure suggests, those who supported Rhee, known for his hard-line stance of loyalty to the late President Roh, voted for Woo.

The contest yesterday was seen as a battle between the biggest faction and the rest to gain an upper hand within the party before it holds a general convention early next year to elect a party leader and supreme council members.

The fact that Lee was able to go into a final round was seen as a sign of growing disgruntlement with the pro-Roh faction and its hawkish stance.

While seen as a pro-Roh figure, Woo is also known as a pragmatic politician with a rational, legal mind-set, and that has raised hopes he will reach across the factional lines to unite the highly divided party.

The NPAD’s divisions were laid bare to the public last month when more than 30 of its lawmakers openly demanded Park Young-sun, then the floor leader, step down and take responsibility for giving too much to the Saenuri Party in negotiations on the special Sewol law. Park also tried to appoint a former Saenuri member as an interim leader.

Shaken by the open criticism, Park threatened to not only resign from her position but also to leave the party.

Though the former journalist opted to stay in the party, she resigned from the floor leadership on Oct. 2.

The upheavals within the NPAD has led to criticism in and out of the party that many of its lawmakers are only interested in seizing power within the party rather than coming up with policy alternatives to compete with the ruling party.

As Woo noted yesterday that he and his Saenuri counterpart Lee Wan-koo need to “sit again for talks.” Attention is being paid to how he will conclude negotiations with Lee on the terms of the special Sewol law.

Though the two reached an agreement on the special law last month following months of partisan wrangling, it has yet to be decided whether the relatives of the Sewol victims will be involved in a recommendation process for four special prosecutor candidates.

Under the agreement reached on Sept. 30, the two parties consented to a manner of forming a seven-member recommendation committee that will pick candidates for a special prosecutor to investigate the cause of the April 16 disaster.

Ultimately, the committee will make recommendations of two candidates. President Park Geun-hye will make the final choice of the special prosecutor.