SK to support start-ups in Daejeon

SK to support start-ups in Daejeon 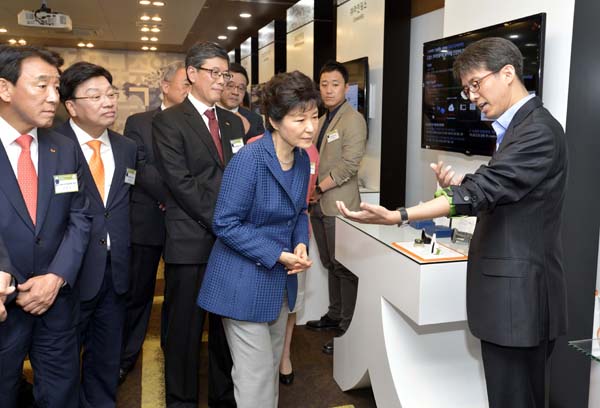 President Park Geun-hye watches a demonstration of a device at the Daejeon Center for Creative Economy and Innovation yesterday. Third from left is SK Telecom President Ha Sung-min. [NEWSIS]


SK Group will inject nearly 100 billion won ($93 million) into the Blue House-led creative economy innovation center in Daejeon and will serve as a mentor to start-ups and SMEs in the region.

The nation’s third-largest conglomerate signed a memorandum of understanding yesterday in Daejeon, promising that it would work to make the city a hub and help start-ups and SMEs in accordance with the government’s creative economy philosophy. The document was also signed by 44 other parties including the Daejeon city government, the Korea Advanced Institute of Science and Technology and the Daedeok Research Complex Foundation.

President Park Geun-hye also attended the event yesterday to celebrate the expansion of the Daejeon Center for Creative Economy and Innovation and the start of a “creative village” in Sejong, an administrative city about 120 kilometers (74 miles) south of Seoul.

The government has said that its blueprint for the creative economy will be based on each region’s characteristics. The Park administration is aiming to set up 17 centers by the first half of next year, with a major conglomerate serving as a mentor for each center.

Last month, Samsung Group was selected to lead the Creative Economy and Innovation Center in Daegu, becoming the first conglomerate to head one of the projects, and SK Group is the second conglomerate to join in.

“SK, which has world-class abilities in IT, semiconductors and energy, will serve as a reliable mentor and partner here,” Park said at the event. “We will support the Daejeon Center for Creative Economy and Innovation to be an ‘incubator for success’ at which ideas for start-ups are turned into products and services.”

SK said that it will invest 87.6 billion won in Daejeon and 5.9 billion won in Sejong. The group will help start-ups develop their products or services and will support them in finding a sales channel. It hopes some of the new companies will make it to Silicon Valley in the United States.

“By using resources of big companies [and their] networks, I believe the effectiveness of their [start-ups’] business will be larger than ever,” Park added.

SK Group said that in order to systemically foster start-ups, it started the “Dream Venture Star” contest last month to pick the 10 best teams out of 180. They will be given 20 million won in initial funding as well as offices at the creative economy center for free.

Meanwhile, for the creative village in Sejong, the conglomerate said that it is focusing on developing agriculture businesses and combining them with its ICT technology.