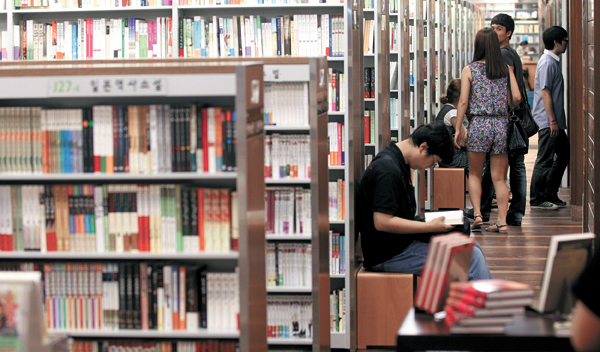 Books that are turned into films are getting an extra boost in the literary market, backed by the popularity of movie adaptations. [JoongAng Ilbo]

At a glance, there doesn’t seem to be much difference between movie theaters and bookshops these days. The best-seller shelf in stores selling novels is often stacked with publications that have been adapted into movies, while film posters promoting the original books are exhibited all over.

Of course, films inspired by literary works have been around for years, starting in Korea with Lee Gyeong-son’s “The Pioneer” (1924), which was based on writer Lee Gwang-soo’s eponymous novel.

Because a published book often has a pre-existing fan base, its cinematic version usually receives an extra popularity boost when it hits the big screen.

But in the past couple of years, this particular genre - novel-based movies - has started to reversely affect the publishing industry, pushing the original printed works to the top of the best-seller list in Korea’s online and offline bookstores.

The phenomenon has spread so much within the local literary business that the term “screen-seller” has been newly coined to indicate books that sell well after making it to the movie theaters.

Swedish film “The 100 Year Old Man Who Climbed Out the Window and Disappeared,” based on best-selling novelist Jonas Johansson’s book of the same title, was released domestically on June 18. According to statistics released by Interpark, a leading online shopping mall in Korea, it soared to the top of the best-seller list, where it stayed for three consecutive months from June to August.

The movie is based on the whimsical adventure of an old man who one day decides to escape his residential home and becomes involved in all kinds of trouble.

“I watched the movie and thought the book would tell the story better,” said Kim Ji-eun, 26, who decided to buy the novel after watching the film.

Another best-seller that received a push from the success of its movie version was John Green’s “The Fault in Our Stars,” which centers on the heart-rending and life-appreciating story of two teenagers who are chronically ill. 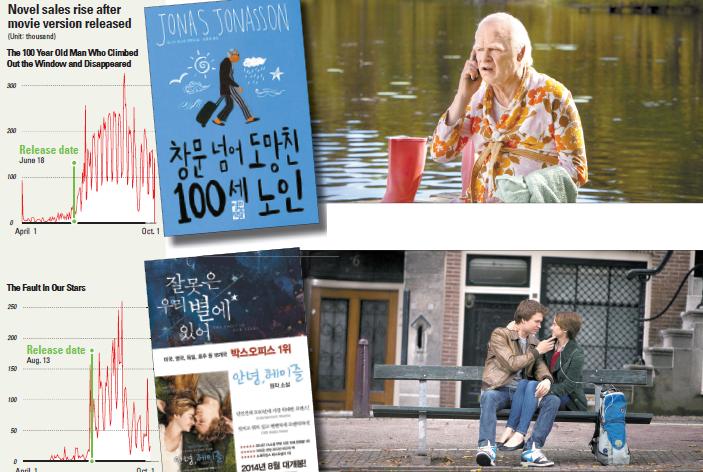 Top; “The 100 Year Old Man Who Climbed Out the Window and Disappeared” by Jonas Johansson topped the best-selling list for three consecutive months after the movie’s domestic release.above;John Green’s “The Fault In Our Stars” is in the limelight for the first time since it was published in 2011, after the movie was released in Korea in August.

The book was published in Korea in 2012 but did not do so well at first. Two years later, however, when the movie adaptation got its domestic release on Aug. 13, sales rose steeply and it landed in second place on the best-seller list that same month.

Korean novelist Kim Ae-ran’s latest work, “My Brilliant Life,” was also dramatized on the silver screen, featuring top actors Song Hye-kyo and Gang Dong-won. When the book garnered attention for being made into a movie, its sales shot up. More than 300,000 copies have been bought since “My Brilliant Life” was published in 2011.

The situation seen in the past, where movies were reinforced by the content and popularity of the original book, has reversed. It is the novel that now relies heavily on its film version for success.

Superficially, the symbiotic effects of adaptations seem to do no harm, but critics point out that there are downsides to this phenomenon for the publishing industry. Some say relying on other forms of popular culture to sell novels indicates how vulnerable the literary market really is.

Because leisure experiences have become exceedingly dependent on digital gadgets, the publishing industry is also becoming subordinate to technology. If books aren’t exposed through films, and receive less media interest as a result, there is less of a chance that readers will pick them.

Kim Ae-ran’s “My Brilliant Life” was picked up by many readers after it was announced that it would be made into a movie with Song Hye-kyo and Gang Dong-won. [JoongAng Ilbo]

“There is a risk that books that are not made into movies will experience some kind of a reverse discrimination,” said Heo Hee, a literary critic.

“Filmmakers prefer books that have a clear story development with a precise narration.”

Heo also pointed out that readers will suffer as a consequence.

“But there are also books that talk about calmer issues that sometimes give linguistic inspiration to readers with their prose,” Heo explained.

“It’s difficult for these kinds of books to lure interest from the film industry and thus the readers.”

Books selected by filmmakers are also usually already well-known among readers, which makes it difficult for new or relatively unknown writers to receive attention.

For example, Kim Ryeo-ryeong, who has had the novels “Punch” and “Elegant Lies” made into movies, was already a best-selling author before receiving further exposure.

“The book-and-movie combination is not as effective as expected in expanding the publishing industry,” said Heo.

“Novels that are revisited by filmmakers are usually ones that are already highly marked within the industry.”

Despite concerns, the publishing industry is trying to look on the bright side. Since the literary market has been sagging for years, with the number of people reading hard copies of books decreasing every year, a film that introduces a novel to the public on a grander scale is seen as more than a bonus.

“While some may worry that the readers’ choices are too concentrated on ‘screen-sellers,’ we consider it a nice opportunity to introduce the original book to the potential readers,” said Lee Ji-young, an assistant manager at the publishing department of Yes 24, an online retailer in Korea.

“Also, books that are dramatized into movies mean that they have been approved in terms of content and quality.”

“There are a lot of positive consequences we get from the movies if they do well in the theaters,” said Kim Eun-kyeong, a marketing director at Mirae’N, which published the Korean-language version of “The Fault in Our Stars.”

“Promotion for books is very limited in online and offline bookstores. If movies are well received by the public, we can build a marketing strategy combining the movie and the book, which means a lot to us.”

The publisher often replaces the book’s old cover with a jacket that shows the film’s official poster, and rolls out many promotional events related to the adaptation, such as selling a cinema ticket as a package with the novel.

It is doubtful that books that act as inspiration for films will disappear anytime soon.

Even more ambitious plans to churn out cinematic versions of books are coming up. French novel “Woman in Straw,” written by Catherine Arley, will be remade in Korea under the title “Secret Temptation,” starring Im Soo-jung and Yoo Yeon-seok.

Actor Ha Jung-woo’s second directorial feature, “Chronicle of a Blood Merchant,” is also based around a book by one of China’s most influential writers, Yu Hua.

And most recently, news broke that French best-selling author Guillaume Musso’s “Will You Love Me” will be turned into a Korean movie, the first Asian adaptation of the novel.

“There can be concerns that readers’ preferences lean toward one side, but in the end it is a virtuous cycle that both benefit the film and the publishing industry. ... Literature becomes movies because they like the literature, and likewise, if people like the movie, they revisit the book,” said Yu Gina, a film critic and a professor of film and digital media at Dongguk University.