Hyundai Heavy in a large reshuffle

Hyundai Heavy in a large reshuffle 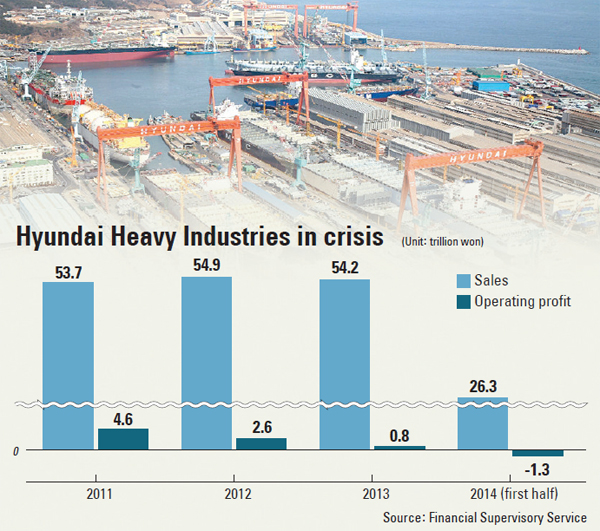 Hyundai Heavy Industries, which suffered a 1.2 trillion won ($1.1 billion) loss in the first half of the year, is being shaken up from the top down.

On Sunday morning at 9 a.m., President Kwon Oh-gap called in seven top executives for a two-hour meeting at the company’s headquarters in Ulsan.

“All 260 high-ranking officials must hand in their resignations,” Kwon announced, “and the head of each department or division should bring in a plan that would reform the entire company by Friday.

“The company will operate with its sales department as its center,” he continued.

The world’s largest shipbuilder generally reshuffles its management in late November or early December, but Kwon’s reshuffle of executives will be done by the end of this month.

“The possibility is high that only about 200 seats will be maintained by executives,” a spokesman for the company said. “And more than 30 percent of the positions will be filled with new faces. What I heard was that many young people in managerial-level positions will replace the old boys to bring some fresh air to the organization.”

Positions will also be chopped to restructure the conglomerate with its sales and production departments as its center.

Yesterday, the company named Vice President Kang Hwang-gu as the new chief of Hyundai Mipo Dockyard. Along with Kang, three other executive-level officials were reassigned within the company.

One of the core reasons for the reshuffle is that the company wants to conclude wage negotiations with its labor union.

Hyundai has an exemplary record in labor-management relations; it hasn’t had a strike in 19 years. But that record is on the verge of coming to an end. The union is considering a strike.

According to the company, the union is holding out for a monthly wage increase of 132,013 won, while management is offering a 37,000 won boost.

Industry sources said Hyundai Heavy Industries’ extraordinary meeting of shareholders scheduled for Oct. 31 is another reason for the reshuffle, since the company’s share price has fallen from 168,500 won per share on July 29, to 115,500 won yesterday.

“Kwon wanted to reach an agreement on the [labor] issue as soon as possible since he was appointed to the post last month, and he though it was very necessary to stabilize the company,” a Hyundai spokesman said. “But he decided to carry out the reshuffle earlier than he expected as the labor union hasn’t even shown up to negotiate lately.”

More specific plans are predicted to be announced by the end of the month. According to industry sources, Hyundai might consider walking away from businesses like solar energy and wind power, which the company entered when times were more prosperous.

But it’s questionable whether a reshuffle can overcome hard times in the shipbuilding industry as well as competition from China and Japan. A report by Clarkson Research in the United Kingdom said that Korea was third in terms of outstanding orders, with 421,500 compensated gross ton (CGT) after China’s 922,800 CGT and Japan’s 551,800 CGT.

“We seriously need to face up to reality,” Kwon said. “We need to be newly born through an intensive reform.”