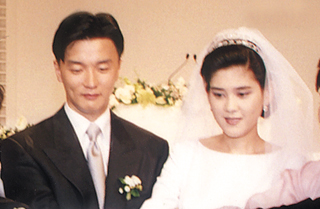 Im Woo-jae, left, and Lee Boo-jin during their wedding in August 1999. [JoongAng Ilbo]


A famous Samsung Cinderella story has reportedly come to an end with a marriage that seemed like it would have a fairy tale outcome concluding in divorce.

According to a local news report, the second child of Samsung Group Chairman Lee Kun-hee is breaking up with her husband of 15 years.

It has been reported that Lee Boo-jin, CEO of Hotel Shilla, filed for divorce on Wednesday and has demanded custody of the son she has with Im Woo-jae, vice president of Samsung Electro-Mechanics.

Although no specific reasons were mentioned for the split, it was reported that the couple’s relationship has soured in recent years and that Lee has been preparing for divorce since her father suffered a heart attack in May.

The marriage between Lee’s daughter and Im in August 1999 grabbed attention not only in the business community but also from the general public as their union was considered a modern-day fairy tale.

Im came from an average family, unlike his wife, with no associations to owner families of the nation’s leading conglomerates. His father was a private entrepreneur.

The story goes that Im, who was an average-level employee of Samsung C&T, met his wife while undertaking volunteer work through his company in 1995.

It was said that Lee pushed for the marriage despite strong opposition from her family.

To persuade Lee’s relations, Im reportedly visited to every member of the Samsung family members ahead of tying the knot.

Since the marriage, Im has left the country to study in the United States and has worked at Samsung’s U.S. branch. In 2005, he was promoted to a Samsung Electro-Mechanics executive and later climbed the ladder further, becoming managing director in 2009. Two years later he was made vice president, his current position.