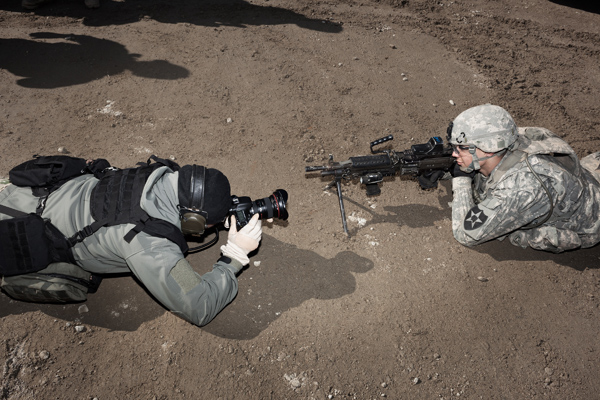 “Sneaky Snakes in Scenes of Incompetence #XIV010501” by Noh Suntag shows a soldier ready to shoot while a photographer shoots him. “They both shoot,” said Noh, who has been designated as this year’s Korea Artist Prize winner

It was no surprise that this year’s Korea Artist Prize, one of the nation’s major contemporary awards, was given to Noh Suntag last month out of the four finalists.

Noh, 43, who has already won or been nominated for many accolades in Korea and overseas, deals with sensitive political issues, in particular “state violence in South Korea.” His photographic works spontaneously balance the border between photojournalism and fine art.

For the prize, which is co-sponsored by the National Museum of Modern and Contemporary Art (MMCA) and the SBS Foundation, Noh presented a new series of photos titled “Sneaky Snakes in Scenes of Incompetence.”

His images are now on display at the MMCA Gwacheon, south of Seoul, as part of the Korea Artist Prize show running until Nov. 9.

In the series, the artist’s photos capture various people at protest sites, or other places full of political tension, who are also holding cameras. 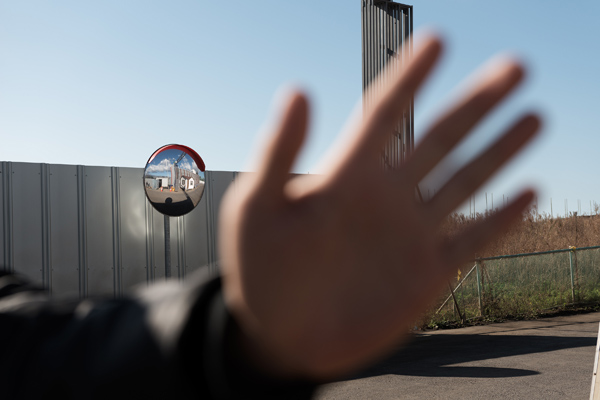 The subjects include demonstrators and riot police who compete to secure evidence against one another, as well as photojournalists, passersby who have drawn out their camera phones and even politicians taking selfies.

“Now everybody can and does take photos,” Noh told the press at the MMCA Gwacheon last month after he was announced as the prize winner. “The series reflects my repeated question about photography’s power and limitation as a tool to reflect and change society.”

“The series captures people holding cameras in the sites of the sharpest conflicts,” he continued. “They take pictures with diverse aims and diverse angles ... It suggests photography has sneaky qualities.”

The “Sneaky Snakes” series covers almost all major protests and disputes in Korea in recent years, including a demonstration against the construction of a naval base on Jeju Island; a rally against a high-voltage power line pylon construction in Miryang, South Gyeongsang; and the sit-in by the families of the tragic Sewol ferry sinking’s student victims regarding the special Sewol law.

Accordingly, the series, which consists of more than 200 photos, seems like a record of Korea’s ongoing history of social conflicts, written in images instead of text.

At the same time, the photos are a kind of self-portrait of the artist who has been running from one site of dispute to the next.

The photos avoid bluntly taking a political side, although the artist has generally been critical of state power, with his stance reflected in the photos’ subtle tones.

The focus of “Sneaky Snakes” is on the people who try to capture the substance of ongoing conflicts through photography - often the substance they prefer - or just encapsulate spectacles. Many photos in the series are therefore slightly humorous, despite the seriousness of the events.

Along with the “Sneaky Snakes” series, Noh’s most important past works are on display. Among them, a photo of and an accompanying note by the artist shows his view that much of what he thinks is state violence in South Korea is because of the reality it faces with North Korea. 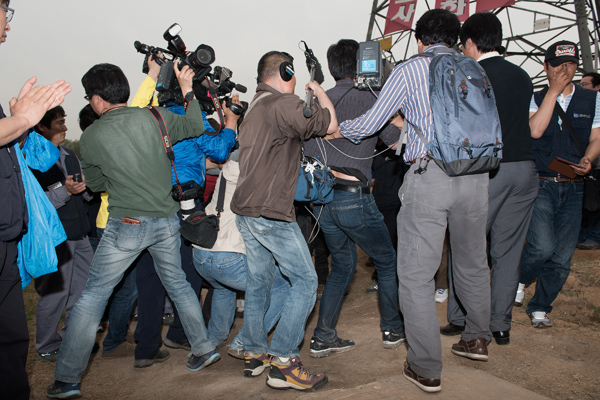 “#XIII050901” of the “Sneaky Snakes” project. The series captures people holding cameras during intense conflicts. It is now on display at the National Museum of Modern and Contemporary Art’s Gwacheon branch, south of Seoul. Provided by the museum

The image captures a wall of marine forces in Baengnyeong Island in the Yellow Sea. Clear water flows from a beautiful stream in a wall painting, but right below it in reality, filthy water drips down from the sewage.

“The division of the two Koreas has been operated in this way,” said Noh. “Below noble will for the protection of the system and patriotic brotherhood, the severe oppression and surveillance against the political opponent and the hereditary iron-fist reigned in reality. They [two Koreas] were reflections of each other, and were in desperate need of each other.”

Among other works on show is Noh’s “The strAnge ball” (2006) series, which brought the artist to prominence. 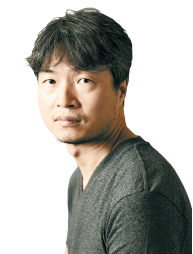 The series consists of black-and-white photos that show various scenes from Daechuri in Pyeongtaek, Gyeonggi, where residents have been protesting the expansion of a large U.S. army base. Each image contains a white ball. In one photo it is zoomed in on, shining amid tree branches. In another, it is barely seen over the clash of protesting farmers and riot police.

The “ball” is actually a radome (a portmanteau of the words radar and dome) from the U.S. army base.

Compared to this series, which has a strong ambience of fine art despite its sharp criticism of certain political issues, “Sneaky Snakes,” consisting of color photos of dynamic scenes, appears more like photojournalism.

Regarding this, Noh said, “The difference between myself and photojournalists is that I focus on the situations before and after the peak of a protest or dispute, whereas they focus on the peak.”

The “Korea Artist Prize” exhibition featuring Noh and the three other finalists runs through Nov. 9.