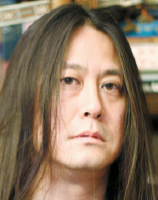 
As a Chinese-American, Kaiser Kuo, a rock guitarist-turned-director of international communications at China’s largest search engine, Baidu, developed cultural sensitivity in the use of mobile technology and the Internet.

He said Western tech companies often make false assumptions about Chinese net users, noting that the Chinese embrace e-commerce and the Internet in fundamentally different ways from those of Westerners.

Kuo was a speaker for DreamPlus Day 2014, where start-ups and accelerators gathered to seek business opportunities. About 150 people from 12 countries attended the Oct. 3-4 event hosted by Hanwha S&C.

Q. From an insider’s perspective, are there any unique or interesting characteristics of Chinese web users?

A. In the West, especially in the tech industry, there is little understanding of how specific cultural and linguistic spheres have a tremendous hold on the ways people use the Internet. One of the aspects I find very interesting is that even though there is a huge number of net users [in China], they are not as fragmented as U.S. users. When there is an interesting post on news or some kind of Internet persona emerging, people all start talking about it. No matter where you are, it reverberates very quickly. So two days after major posts, many Chinese already have read the same post through different media channels. There is a very dense weave of social media.

Korean net users also are known for favoring homegrown portal sites. What do you make of Koreans’ use of the Internet?

I think Korea has something in common with China, because the Chinese also developed a quirky and idiosyncratic way of using the Internet. Koreans also rarely go to search engines created by other countries. I think the personalities of these two countries are very similar in this regard. Korea’s popular websites have different designs and settings than American websites.

What other kind of technology has attracted the Chinese, and how do they use it?

You have been a guitarist, reporter and now a communications officer. On the surface, your career path looks a bit divergent.

I have always been interested in doing things that leverage my Chinese-American identity. Whether I am doing music or reporting and communications work here at Baidu, it’s all part of the same thing. I always want to contribute to reducing misunderstanding between China and the rest of the world - especially Western countries.

There is something every day that makes me keenly aware of the chasms. For example, when we look at what’s happening in Hong Kong right now, people who observe this in the United States rarely know any historical context.

I also am equally frustrated by the way Chinese media often misunderstand the United States. I learned from my parents that it’s possible to understand and empathize with both sides. They fully took on board the assumptions that led Chinese people to behave and take positions, and fully took on board the assumptions and experiences of Americans. So, that was always inspiring to me.