Will Hyundai’s new lion, the Aslan, roar or purr?

Will Hyundai’s new lion, the Aslan, roar or purr? 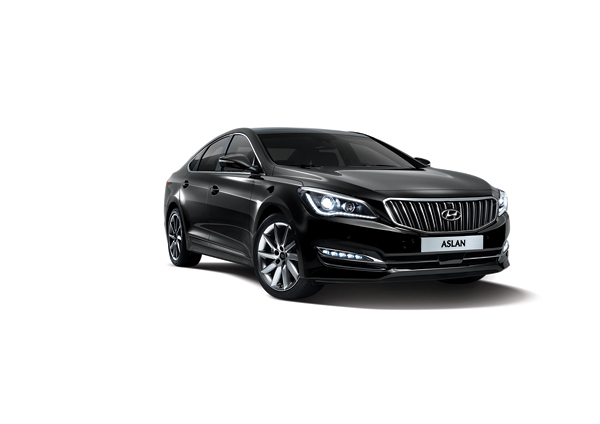 September obviously wasn’t a good month for Hyundai Motor, as the nation’s largest automaker saw its domestic sales decline to 45,275 vehicles, down from 46,032 in August, the first month-on-month decline in 13 months. Hyundai, however, is looking ahead to next Thursday, when it will start selling its new premium front-wheel-drive sedan, the Aslan, which means lion in Turkish.

This week, the company started Aslan training for about 2,200 employees and began displaying the new “lions” in core Seoul areas, including Gangnam District, and major cities like Busan and Daejeon. The Aslan is Hyundai’s first new model since 2008, when the Genesis was introduced.

The question is whether the Aslan is what Koreans are looking for.

The Aslan is built on the Grandeur HG platform and shares some of the same features, while offering safety options found in the Genesis. Available engines are the 3.0-liter and 3.3-liter V6 GDi from the Lambda II family.

With an eight-inch head-up display and navigation, it is equipped with Hyundai’s forward-collision and lane-departure warning systems, as well as nine air bags. The safety highlight is the Blue Link system that provides automatic collision notifications, enhanced roadside assistance, vehicle diagnostic alerts, monthly vehicle health reports and in-vehicle service scheduling at no cost for five years.

Such features and electronic stability control that automatically adjusts the suspension according to road conditions will make drivers safer and more comfortable than the Grandeur, which has 2.4-liter and 3.0-liter gasoline engines and a 2.2-liter diesel engine. But the design looks like a mix between the Grandeur and the Genesis, which might disappoint buyers hoping for something different from Hyundai.

It will be interesting to see if the Aslan, for which Hyundai prioritized safety and advertised “premium comfort,” can attract domestic buyers. According to a sales report earlier this month, the combined market share of Hyundai Motor and Kia Motors in September was 62.5 percent, a 6.4 percent drop from the same month last year.

Considering that the market share for GM Korea, Renault Samsung Motors and Ssangyong Motor increased slightly or stayed almost the same, it is likely that some of the market share was lost to imports.

A Korea Automobiles Importers and Distributors Association (Kaida) report earlier this month said one out of every four new cars sold in the country last month was a fuel-efficient import with a 2.0-liter engine or bigger.

The best-selling import this year has been Volkswagen’s Tiguan 2.0 TDI BlueMotion (6,255 units through September), followed by the Mercedes-Benz E220 CDI (4,830) and the BMW 520d (4,714). The Tiguan gets 13.8 kilometers per liter (32 miles per gallon), while the BMW 520d gets 16.9 kilometers per liter. Since the Aslan only has two gasoline engine options, it is hard to imagine it being more fuel efficient than the BMW 520d and the Tiguan, both of which offer engines that run on diesel, which is far cheaper than gasoline in Korea.

“Hyundai Motor expects the Aslan to restore the market share it lost to imported brands such as BMW’s 520d in the midsize and large-car segments, but considering the price range and its features, it might instead compete with the company’s own models, such as the Genesis and [Kia’s] K7,” said auto columnist Kim Tae-cheon.