TECHNOLOGY: IoT, wearables the way of the future

TECHNOLOGY: IoT, wearables the way of the future

The intensifying search for the next big IT product or system comes against the backdrop of unprecedented challenges for a Korean economy that once thrived on the ICT industry.

Apple, Google and other U.S. companies from Silicon Valley dominate the global software market with a solid footing in the ecosystems they have created, and smart devices are becoming more dependent on the operating systems and apps developed by such companies. At the same time, Chinese IT enterprises are threatening Korean companies’ hardware business, while service companies like Alibaba and Tencent have expanded aggressively.

Even Korea’s biggest tech conglomerate, Samsung Electronics, is feeling the pinch. The company’s operating profit in the third quarter wasn’t as severe as some projected, but it shrank by more than half compared to the same quarter a year ago. It managed - barely - to stay above 4 trillion won ($3.76 billion), thanks to its thriving computer chip business.

However, the real challenge for tech companies is identifying, developing and exploiting future businesses that will compensate for the declining profits of smartphones. 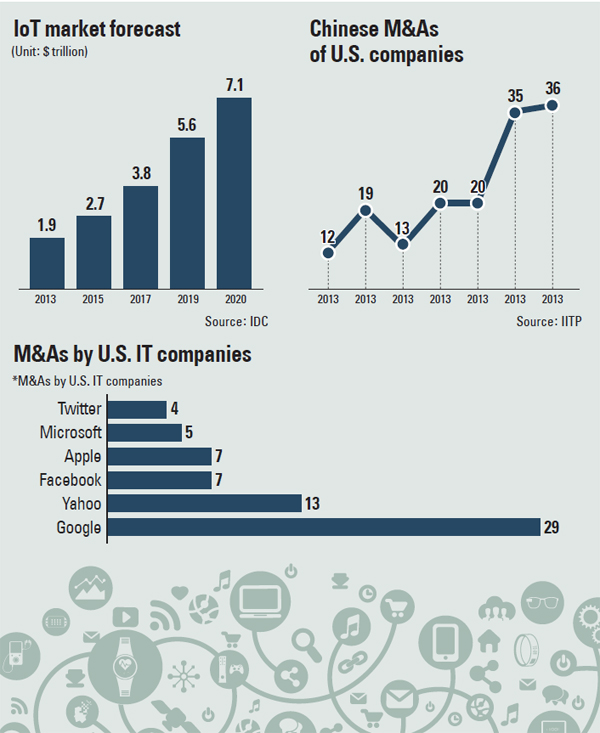 Market experts agree the next big revolution in the IT industry will involve IoT and wearable devices.

With the world’s first smartwatch released by Samsung Electronics a year ago and the Apple Watch due in early 2015, the wearable and IoT markets have grabbed headlines and interest has spiked. Research agency IDC projected that the IoT market will hit $7.1 trillion in 2020, compared to $1.9 trillion last year.

“Businesses are taking the necessary steps to gain a deeper understanding of the IoT and its overall value,” says Vernon Turner, senior vice president at IDC. “Technology vendors are evolving their solutions in a supply-driven market that’s edging toward becoming a more demand-driven market.”

The IDC report noted that the two biggest tech companies - Apple and Google, both based in Silicon Valley - are locked in a fierce competition for IoT supremacy, which includes mergers and acquisitions.

“The enormous impact that the introduction of the smartphone has brought to the market is still fresh in the minds of suppliers, and for that reason the manufacturers are showing their determination to prepare, one way or another, to take the lead in the IoT, which is considered the new mega trend,” says Lee Jong-geun of the LG Economic Research Institute.

The LG researcher cites recent moves by Google and other global IT companies.

“Google, earlier this year during its developer conference in San Francisco, announced its initiative ‘Android Everywhere,’ where everything will be connected, whether through a wearable like a smartwatch or a system installed in cars,” he says. “The company talked about how most of the surroundings to which consumers are exposed will be connected to a Google platform, where real-time weather and traffic information, and schedule management and even health management, will be provided whenever and wherever.”

Apple executives have made similar comments about taking the lead in the global IoT market through the company’s home kit and health kit.

“Apple’s introduction of Swift, a computer programming language, should be given serious attention,” says Lee. “Why introduce Swift when one can still make an OS app with existing objective C programming language? It seems Apple is trying to secure the IoT ecosystem earlier than its competition by providing a programing language whereby you don’t need to be an expert in software engineering to create an app. It is creating an environment that can generate a wide variety of apps from a larger pool of developers.”

He says that when it secures this environment, Apple will be able to easily create its own Apple IoT ecosystem.

In addition, Samsung has been trying to strengthen its non-smartphone businesses by expanding in B2B and IoT services, holding several software and open-source developers’ forums in recent months.

But without a proper ecosystem, many local IT companies have been struggling.

According to Korea’s Institute of Information and Communications Technology Promotion, several local IT companies - including LG CNS, Shinsegae I&C and Daekyo CNS - recently shuttered their digital content businesses as Google and other global companies dominate the market.

Jeong of ETRI says Korean companies, especially conglomerates, have been too conservative in their research and development efforts.

“The questions is who is going to take the lead” in the next IT market, says the senior researcher. “Although we take pride in being a strong IT country, I think we failed to prepare properly. Our IT industry is still centered on hardware and devices. Just take smartphones. We have the largest share of the global market, but Android and Apple’s iOS are dominant in the economy, which is a huge difference.

“From the first Galaxy smartphone to the Galaxy Gear, Samsung’s devices use Android, and even LG, which manufactures well-designed high-end smartphones, is just among the many Android brands in the market.”

Even though there has been some criticism that there is nothing innovative about Apple’s first smartwatch, says Jeong, it is undeniable that Apple continues to expand its ecosystem with the device. The same can’t be said for Samsung Electronics, which was, in fact, the first IT company in the world to commercialize a smartwatch.

“I think we’re working backward,” he says. “First we create a device and then start to find a purpose the device can serve. It should be the other way around.”

The market researcher said that unlike other companies from the United States and even China, which is rising as a new threat, Korean conglomerates have been reluctant to pull the trigger on acquisitions of outstanding small and midsize technology companies.

“Here in Korea, when we mention M&As, we tend to have a negative tone,” says Jeong. “It should be like it is in the case of companies in the United States and China.”

According to an IITP report, in the first nine months of this year, Google acquired 29 IT companies. Apple and Facebook bought seven companies each, and Yahoo secured 13 companies.

And Chinese companies in recent years have become ever more aggressive in securing outstanding IT companies.

In 2009, Chinese companies bought only 13 U.S. IT companies. Last year, that figure nearly tripled to 36.

Companies like Alibaba, Tencent and Baidu have not been hesitant about using their massive financial resources to aggressively invest in U.S. IT companies that can give them an edge in the global market.

But in the case of Korean companies, the figures have been shrinking.

Samsung has made only three M&As this year, though they were companies that specialize in app services and IoT.

“Korean conglomerates until now have been relying on a business model that completed or upgraded successful business technologies, instead of creating a new technology or business model,” says Jeong. “They have been trying to make money easily. This should change and they must be more bold and aggressive by funding or securing small and midsize companies that have potentially profitable business models and technology.”