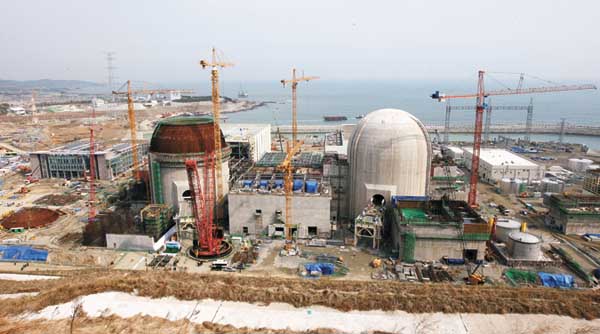 Plans call for reactors identical to Singori 1 and 2 in Ulsan, above, to be built in Samcheok, Gangwon, and Yeongdeok County, North Gyeongsang. By Song Bong-geun

The Ministry of Trade, Industry and Energy came under fire at the parliamentary audit sessions last week for its plans to build additional nuclear power plants.

Much of the criticism came from opposition parties and residents of Samcheok, Gangwon, one of two cities selected as a site for new reactors.

The heated discussion sprang from an Oct. 9 referendum by Samcheok residents in which 85 percent of 28,867 voters said they did not want the nuclear plant. On the same night, the Energy Ministry published a statement saying, “The government cannot accept the referendum result, which is not effective in principle, because a ‘government policy’ cannot be the subject of voting.”

The citizens’ referendum came after then-Mayor Kim Dae-soo in December 2010 told city residents there would be a vote on the nuclear plant. Meanwhile, the Samcheok City Council went ahead and notified the government that it would accept the plant.

In March 2011, the city submitted a petition that it said was signed by 97 percent of residents in support of the site selection. Later that month, the Fukushima disaster made headlines and support for a new plant in Samcheok began to erode.

The referendum promised by the mayor never materialized.

After holding a referendum on their own, Samcheok residents demonstrated Oct. 12 in front of an antinuclear monument built in 1999 to commemorate the Energy Ministry’s reversal of its 1982 decision to build a nuclear plant in the small city. Residents fought the decision for 16 years.

In 2004, the government later selected Samcheok as the site for a nuclear waste depository, but residents again forced a change of plan.

Analysts and lawmakers say the Energy Ministry should show its willingness to communicate with residents and possibly change its decision-making processes. 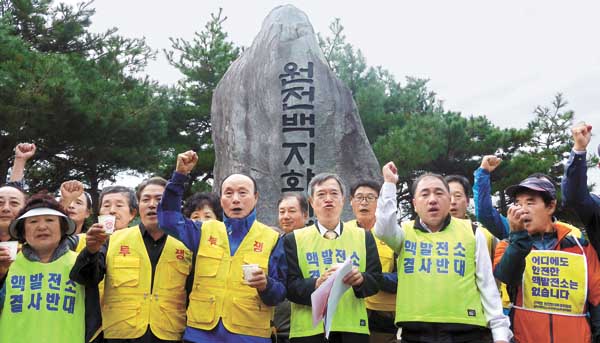 Samcheok residents hold a demonstration on Oct. 12 in front of the antinuclear monument built in 1999. [NEWSIS]

“The government’s attitude is quite ironic,” said Shim Jun-seop, a professor of public administration at Chung-Ang University and a member of the Korean Association for Conflict Studies. “It gratefully accepted the pro-nuclear proposal, but now it says residents can’t change their minds.

“It’s not too late to start over. The government should obtain residents’ consent first, even if it takes some time. Ultimately, policy execution would be a lot faster.”

Ruling and opposition lawmakers urged the Energy Ministry to accept that Samcheok residents do not want a nuclear plant in their backyard at the Trade, Industry and Energy Committee’s audit session last Monday at the National Assembly.

“The nuclear power issue is not something that you can simply bulldoze through,” said Rep. Baek Jae-hyun of the New Politics Alliance for Democracy. “It is something that is impossible without the consent of residents.”

Even Rep. Lee Che-ik from the ruling Saenuri Party lashed out at the energy minister. “What effort has the government made to convince and comfort Samcheok residents?” asked Lee. “I think the ministry so far hasn’t done much to build any trust with them after the Fukushima nuclear accident.”

According to the second-generation energy plan for 2015-35 released last year, the government wants to raise its reliance on nuclear to 29 percent of total power generation capacity, from 25.2 percent as of late 2012. At the same time, the Energy Ministry wants to reduce carbon emissions by 20 percent over the period.

To do so, Korea will need 18 more reactors, 10 of which will be built at existing power plants and four each at new plants in Samcheok, Gangwon, and Yeongdeok County, North Gyeongsang, on the east coast.

Despite the questionable chain of events surrounding the Samcheok city government’s support for the nuclear plant, the Energy Ministry is not considering changing its plan. It argues that the recent referendum has no legal weight and there’s no reason to change its position.

“[As far as I know] the referendum was informally discussed between the mayor and the Samcheok City Council, and I understand that public approval was not a condition when the item passed the city council,” said Yoon Sang-jick, the energy minister. “Central government policy shouldn’t be subject to a local referendum. If referendums were allowed for every policy, the government would have a lot of trouble carrying out its policies and long-term plans.”

He hinted at the possibility that he might try to persuade Samcheok residents to accept the plant. 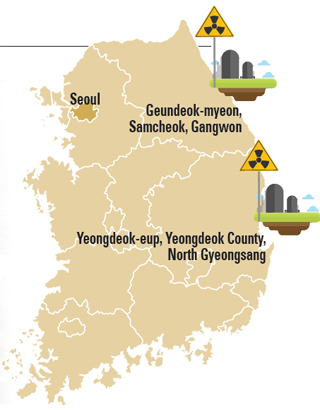 “I don’t think this issue is something the government and public should have a legal fight over,” said Yoon. “Since the Samcheok nuclear plant construction is not scheduled to begin until 2020, the ministry will keep communicating with residents and ask for their understanding.”

On Thursday, an official in the ministry’s energy source policy department said there is no possibility that the second-generation energy plan will be changed.

“The ministry reviews 20-year energy plans every five years, which means the third-generation plan will be discussed in 2018,” the official, who declined to be identified, said. “If there are changes [in nuclear policies], they will be reflected in the next plan.

“I don’t really think Korea can reduce its nuclear power generation, because not many choices are available in the short term. Coal generates too much greenhouse gas, natural gas is too expensive and renewable energy is likely to raise household power bills, and it would take time to build infrastructure.”

During an interview with JTBC last week, Kim Min-jeon, a professor of political communication at Kyunghee University, said the government should communicate with the public more extensively about its nuclear power plans.

“The government should play a role of gathering insights from the Korean public, not just about nuclear power but also the overall electricity supply issue,” said Kim. “The widespread belief in the past that nuclear power is perfectly safe has been broken since the Fukushima accident of 2011.”

“It is true that Korea can’t do much but rely on nuclear energy, especially when it comes to energy security,” said Shim of Chung-Ang University. “If nuclear is unavoidable, the government should invest more time eliciting public agreement about this issue.”