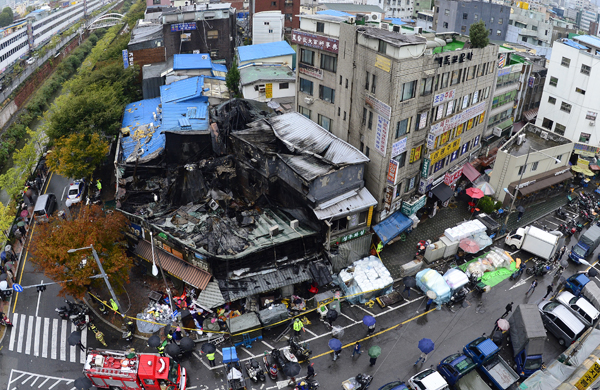 Police officers yesterday cordon off the scene of a blaze at Dongdaemun Market in Jongno District, central Seoul. The fire burned down dozens of clothing shops in the neighborhood. However, no casualties were reported. [NEWS1]

No casualties were reported.

The blaze was put out in an hour and a half, with some 50 people immediately evacuated. No shops were open at the time of the incident.

Police and fire authorities determined that the blaze started in a clothing shop in front of the Jeon Tae-il Bridge on the Cheonggye Stream. The bridge is named in honor of the 22-year-old factory worker and rights activist who committed suicide by self-immolation in 1970.

The fire easily spread to the surrounding commercial buildings, many of which were built with wood in the 1950s and 1960s. Firefighters had difficulty extinguishing the fire across the more than 20 adjacent shops.

“It wasn’t easy to bring the fire under control because shops that sell shoes, clothes, fabric, mannequins and tools were built so close to each other and liquefied petroleum gas was leaking from some of them,” an official with the Jongno Fire Station said yesterday.

Once the fire was reported, 207 firefighters and 67 fire trucks were immediately dispatched to the scene, but 11 of 28 shops there were completely burned down by then and six partially damaged.

“The buildings were vulnerable to fire because they are not large enough to be inspected regularly for fire safety,” said the official. “In order to find a more detailed explanation for the start of the fire, we are planning to organize a joint investigation team and conduct inspections from today at the earliest.”

The blaze has since raised calls for better fire safety measures, particularly given the number of old wooden building situated in central Seoul.

In February, a fire that broke out in Jung District at a decrepit residential wooden building widely referred to in Seoul as the Overseas Chinese Building. The accident occurred less than a mile away from Dongdaemun Market, along the Cheonggye Stream.

The blaze claimed the lives of two residents, 90 and 81 years old. Many of the people living there were elderly and eked out a living collecting wastepaper and other recyclables, which they stored in the building.