Ahead of schedule, KAI delivers 2 jets to Peru

Ahead of schedule, KAI delivers 2 jets to Peru 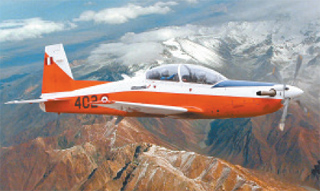 The two-seat aircraft named KT-1P (Korean Trainer-1 Peru) is a variant of KAI’s KT-1 Woongbi light attack aircraft that is mainly designed to train pilots. In November 2012, KAI signed a contract with Peru to deliver 20 KT-1P aircraft for $200 million with the deliveries scheduled to be completed by the end of 2016.

The delivery event at Las Palmas Air Base in Lima on Tuesday was attended by Peru’s President Ollanta Humala and Defense Minister Pedro Cateriano. KAI highlighted that the first KT-1P deliveries were two months ahead of schedule.

KAI, led by CEO Ha Sung-yong, said that of the 20 planes to be delivered to Peru, 16 will be built at a facility at Las Palmas Air Base. The production center was completed last November and KAI has been sending technicians to train local employees.

“Many Central and South American nations are paying attention to the KT-1Ps that will be produced in Peru,” said Humala at the delivery event. “We thank the Korean government and President Park Geun-hye for supporting this project.”

KAI said that first KT-1P made in Peru will come out next August.

The aircraft will replace old planes such as Brazil’s EMB-312s and Italy’s MB-399s, which are currently being used by Peru’s air force.

The company said the production base in Peru will also be used as an export hub for South America.

The Korean aircraft manufacturer said it has so far exported 129 units of KT-1 trainer jets and T-50 supersonic advanced trainers to countries including Indonesia, Turkey, Peru, Iraq and the Philippines.

Currently, KAI is in competition to supply FA-50 light attack aircraft to Peru.