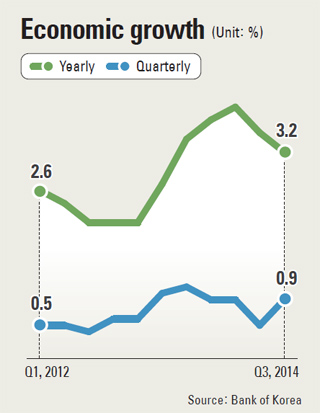 As if to realize the government’s biggest fear, the Bank of Korea yesterday announced the nation’s economy failed to achieve even 1 percent growth in the third quarter despite all-out stimulus efforts.

While quarterly growth improved compared to the second quarter, when consumer spending slowed after the Sewol ferry disaster, this time it was exports that weighed on the economy.

The mediocre third-quarter performance was a clear indication that the aggressive stimulus campaigns pushed by Finance Minister Choi Kyung-hwan since he took office in July, which include lowering the benchmark interest rate, have had little impact.

Policies targeting the domestic market helped boost consumer spending from a 0.3 percent decline in the second quarter to 1.1 percent growth in the third.

However, exports showed a sharp decline of 2.6 percent from the previous quarter, the first negative growth since July through September last year and the largest since the 2008 financial crisis. The last time exports fell so much was a 4.3 percent drop in the fourth quarter of 2008.

The manufacturing industry also contracted by 0.9 percent quarter-on-quarter, the sector’s first negative growth since the first quarter of 2009.

As a result, companies have been cutting back their investments in production plants and machinery. Facility investment did an about-face from 1.1 percent growth in the second quarter to a 0.8 percent decline in the third.

“As exports to China have slowed, overall outbound shipments of goods like computer chips and LCD displays have been shrinking,” said Jung Young-taek, head of the BOK’s economic statistics department. He also cited strikes at automobile plants and the weak Japanese yen.

China announced earlier this week that its economy in the third quarter grew 7.3 percent year-on-year.

It was the slowest pace since it grew 6.6 percent year-on-year in the first quarter of 2009.
As China’s growth loses steam, there have been growing doubts over whether the country can meet its official annual target. If not, it would be the first time in 15 years, and would have a substantial impact on the Korean economy.

The situation is not likely to improve much in the final three months of the year with decelerating growth in China and the threat of slower growth in Europe.

“Despite lowering the interest rate, investment [from companies] is not happening as much as we had hoped for,” Lee said during a meeting with executives from major companies, including Posco, Hyundai Motor and Samsung C&T. “When we lowered the key interest rate [in August], there were several concerns, including mounting household debt. But we decided to go ahead with the rate cut because we wanted to keep the recovery momentum alive.

“Globally, the biggest issue right now is the recovery of growth momentum and at the center of it is private companies.”

“Third-quarter GDP growth has recovered to the same level as in the first quarter after seeing it cut nearly in half in the second quarter,” Choi said. “It will need more time to fully recover.”

The finance minister urged lawmakers at the audit to quickly pass several stimulus-related pieces of legislation pending in the National Assembly.